Brooklyn Borough President Eric L. Adams's letter of praise to the S.V.A.
commending its history and services to the G.L.B.T. communities and beyond

The meeting of the STONEWALL Veterans' Association with the Brooklyn Borough President Eric Adams happened on Monday, September 17, 2018.  The agenda was wide-ranging from the various Stonewall veterans who live in Brooklyn such as Bill Salzman, Ruthybird Campbell and Keith Lonesome and the SVA's interest in opening an auxiliary office in Brooklyn to the "STONEWALL-50" celebrations next June!  The S.V.A. was represented by Willson Henderson (born in Brooklyn), Ramon Bellido (from Harlem but in Brooklyn regularly) and AnDre Christie (previously lived in Brooklyn).  Mr. Adams hosted the productive and interesting meeting in the Brooklyn Borough Hall's fabled, lengthy and grand conference room! 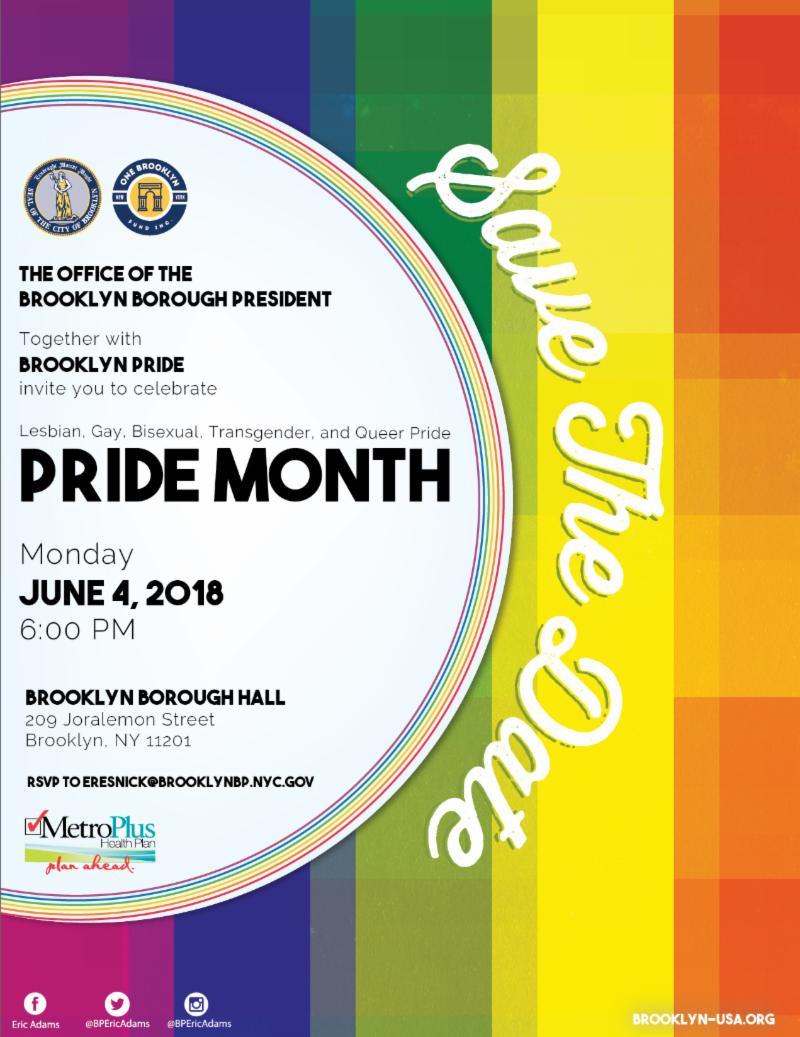 BROOKLYN, NY, June 9, 2014:  Brooklyn Borough President Eric L. Adams hosted board members from Brooklyn Gay, Lesbian, Bisexual and Transgender (G.L.B.T.) Pride in the rotunda of Brooklyn Borough Hall to proclaim the week of June 9 to 14th, 2014 as “Brooklyn Pride Celebration Week”.  The event featured the raising of the G.L.B.T. rainbow flag inside of the building; the flag itself will be openly displayed atop Brooklyn Borough Hall for the duration of the week.  B/P Adams was impressively also joined by war veterans Jeff Malone, a U.S. Army Specialist who performed the presentation of colors, and Taylor Anderson of the U.S. Air Force, who sang the American national anthem.

“The rainbow flag will be above the entire building for the entire city and state to see that Brooklyn Borough Hall is proud to have a large GLBT population”, said Borough President Adams, who will serve as one of the grand marshals in this year’s "Twilight Pride Parade" in Brooklyn.  “It sends a very clear and loud message on how important it is for us as One Brooklyn.  This is what America is about, continuing to move the conversation forward.  And no one, no place, does it better than the Borough of Brooklyn.”

“As someone who worked here before as an GLBT liaison, it gives me such pleasure to witness today’s flag raising”, said openly-Gay Council Member Carlos Menchaca, a former staff member at the Brooklyn Borough President’s Office and also one of this year’s grand marshals.  “This flag speaks to One Brooklyn.  It speaks to a Brooklyn for everyone.”

Brooklyn G.L.B.T. Pride’s 18th Annual Pride celebration, “Coming of Age”, celebrates the innumerable cultures, races and ethnicities that congregate and define Brooklyn.  It has grown to become the largest and most prominent organization serving Brooklyn’s G.L.B.T. community.  Although Brooklyn Pride’s primary mission is to produce the borough’s annual Pride events, the organization actively works to bring pride year round to every Brooklyn neighborhood.

Gay Pride Note:  Conspicuously and inexplicably absent was the STONEWALL Rebellion Veterans Association (S.V.A.), whose members largely "ignited the modern G.L.B.T. rights movement"!  Ironically, the SVA's founder and director was born in Brooklyn and he has lived in New York City for six-plus decades!  For about a dozen years, the S.V.A. with the famous blue 1969 convertible filled with veterans of the landmark STONEWALL Club on Christopher Street in Manhattan generously and proudly led the nighttime Brooklyn Gay Pride Parade!

Eric Lee Adams endorsed for NYC mayor by the New York Post!
And, Eric is vote-ranked second by the New York Daily News!!
Thus, E.L.A. has the highest combined endorsements by the 3 NYC dailies!!!