Although a half-century-plus New Jerseyite, Raymond J. "Ray-Jay" McCaffrey was born on Diamond Street in Greenpoint, Brooklyn, New York on the 20th of February in 1932!  Mr. McCaffrey served in the United States military in the Army during the Korean War.  Civilian Ray moved to Morris County in New Jersey in 1957.  So, like the original Frankie Valli (also from N.J.) song goes, Ray-Jay is a "Native New Yorker"!  It was during one of Ray's many trips from NJ-to-NY's "...free-thinking, artistic and exciting Greenwich Village" that Ray-Jay "....happened to stumble that warm Friday evening on the first night of the 1969 Stonewall Rebellion"!  Ever since, Ray has always been a wonderful, generous and dedicated organization person as proven longtime not only to the legendary STONEWALL Veterans' Association but with its sister group, the acclaimed Imperial QUEENS & Kings of Greater New York.  Ray-Jay has been an elected and popular officer of both the S.V.A. and the IQKNY!!  Both groups have been widely praised by the most prominent public officials and organizations in both of Ray-Jay's states of record: New York and New Jersey!! 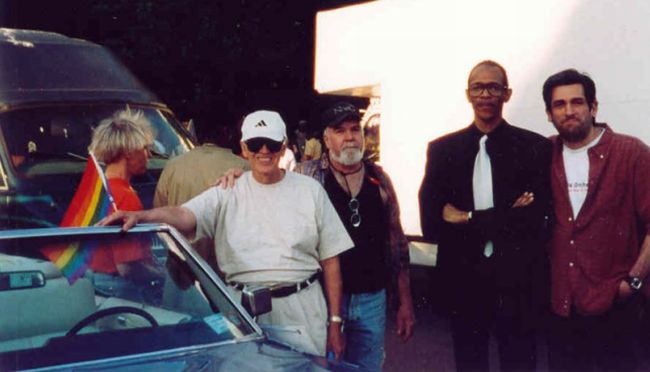 Proudly pictured (l-2-r):  Willson L. Henderson, S.V.A. President (wearing red shirt and blond hair); Ray McCaffrey, S.V.A. Financial Secretary (wearing white shirt and white cap); Ed Heffernan, S.V.A. Executive Committee (wearing black hat and white beard); David Jenkins-Foxworth, S.V.A. Social Chairperson (wearing black jacket and white tie); and Tony Phillips, Next Magazine Editor (wearing burgundy shirt and brown beard), author of "A Visit with the Stonewall Veterans", a popular, enduring article about the STONEWALL Veterans' Association.  This event is for the annual Brooklyn G.L.B.T. Pride Festival and Parade.  The photo location is on Prospect Park West (adjacent to the park) in Brooklyn, New York.  As planned, the blue 1969 convertible "Stonewall Car" -- which used to spend significant time in Brooklyn and the pride of Brooklyn today -- was on display during the rally and the entertainment show and for the pre-parade line-up later.  After the above photo was taken, the S.V.A. officers present (except one) -- including Ray, Willson, Storme DeLarverie, Jeremiah Newton, Keith Lonesome and Rev. Magora Kennedy -- are about to go on stage for the 2002 Brooklyn G.L.B.T. Pride Rally.  The SVA-ers were presented to the big outdoor audience and after self-introducing each Stonewall vet, Willson spoke to the wildly cheering crowd.  Not shown are Leigh McManus, S.V.A. Stonewall Newzletta editor; Ramon Bellido, S.V.A. Boardmember; and Electra O'Mara, S.V.A. Secretary.  The S.V.A. Treasurer Terri Van Dyke, also a dear friend of Ray, was happily with us with the grand "Stonewall Car" for this outing but, still ailing, he stayed seated in the open Stonewall convertible during the rally.  When we all went out to eat later at the nearby Circle Restaurant, kind Ray kindly treated Terri to a quality dinner.  (Brooklyn Pride provided no accommodations or reimbursements for the S.V.A. or any Stonewall vets or the famous car.) 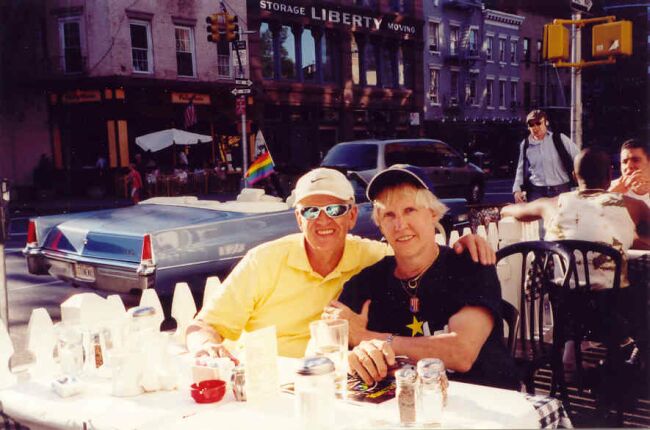 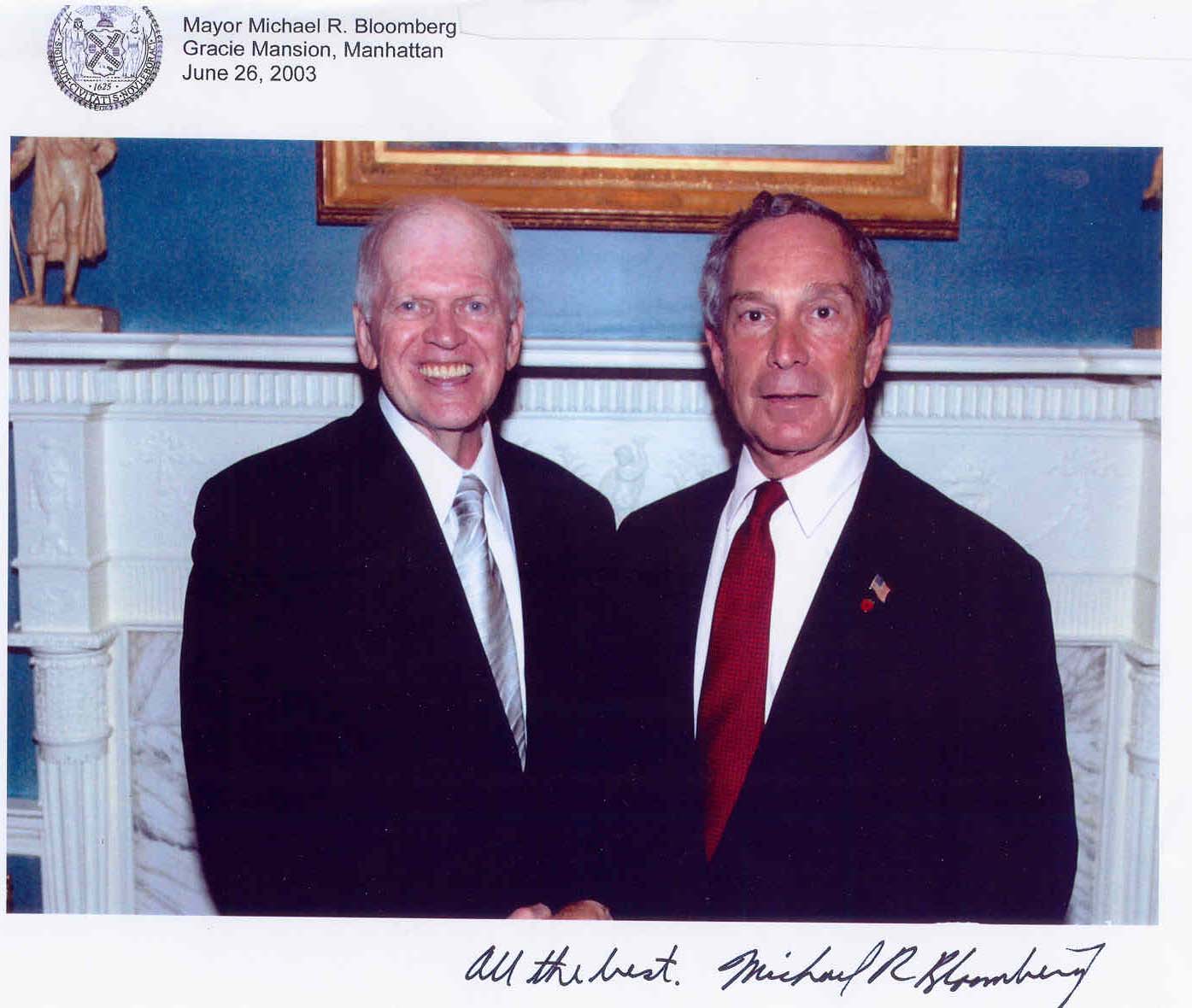 Raymond J. McCaffrey with Mayor Michael R. Bloomberg at Gracie Mansion
[Photography by the Office of the Mayor of the City of New York] 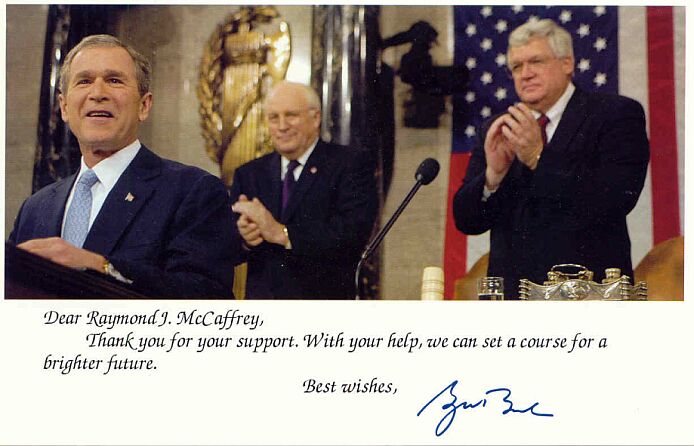 Best Wishes to Raymond J. McCaffrey from President George W. Bush, Jr.
[Photography by the Office of the President of the United States]

Click on "Listen" button (circled in red) to hear a clip of the interesting interview by Margot Adler with Ray McCaffrey -- and Willson Henderson and Bill Salzman -- of the National STONEWALL Veterans Association in the U.S.A.

IN MEMORIAM:  Raymond J. "Ray-Jay" McCaffrey, a member of the board of directors of the
STONEWALL Veterans Association, died peacefully at his home on Monday, April 8th, 2019.

It is incredible that it has been a year since we lost our
longtime friend and colleague and your dad, Ray McCaffrey!
Luckily, Ray-Jay had a full and long life; he greatly enjoyed!

As U know very well, Ray would want to be remembered, and
he is!  He would also be horrified by the Wuhan, China virus,
how it really started, and the Communist Chinese gov't cover-up!

Hope U, Lisa, are okay across-the-board!  Regards to your brother.