===Spirit of STONEWALL March===
for the
Gay, Lesbian, Bisexual and Transgender Community
proudly and Gay-ly led by both the
STONEWALL
Rebellion Veterans Association
with the big blue 1969 convertible "Stonewall Car"
-and-
ACT-UP
(AIDS Coalition To Unleash Power)


'The Gay March' that virtually everyone said would never happen!! 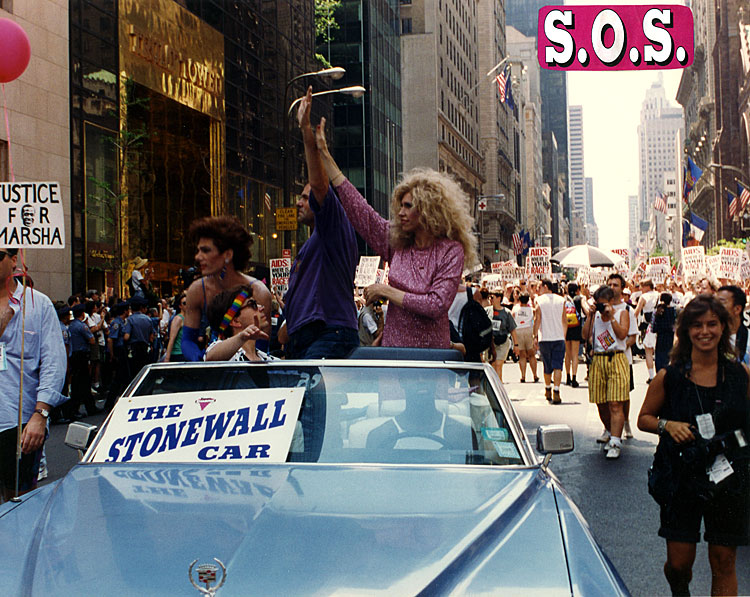 The great Gay history scene above with the "Spirit of Stonewall March" ("SOS") celebrating the remarkable 25th anniversary of the 1969 Stonewall Rebellion on Sunday, June 26th, 1994.  The huge march as shown is almost at its completion on upper Fifth Avenue prior to arriving at the 'front doors' of Central Park.  Pictured above are two members of the STONEWALL Rebellion Veterans Association ("S.V.A."):  grandly Queen Allyson Allante, also of the Imperial QUEENS & Kings of Greater New York ("IQKNY"), and John X. O'Brien ("JOB"), also of AIDS Coalition To Unleash Power ("ACT-UP")!  The openly-Gay fellow in the car 'riding shotgun' wearing the rainbow headband is Andreas "Andy" Bahmann of Frankfort and West Berlin, Germany!  Behind Andy is Stonewall veteran Beverly Bluegown, also of the S.V.A. and the IQKNY, wearing a spaghetti strap blue gown.  It is a veiled Gay reference to "Alice Bluegown" (code term meaning the 'police') in the Stonewall Era!  'Blue' is derived from the color of the New York City Police Department ("NYCPD") police uniforms.  The scene above was a multi-media street press conference and a strategizing pit-stop.  That is why you see people standing in different directions.  On the left in the photo is the towering Trump Tower and in the distance on the right is the landmark Empire State Building, both on Fifth Avenue.  The sign "Justice for Marsha" refers to S.V.A. charter member and Gay Village character, Stonewall vet and transgender activist Marsha P. Johnson, who was found floating dead in the Hudson River after "Stonewall-23" just two years prior near the Gay people's Christopher Street pier.  Mr. Randy Wicker, a Gay pioneer and active supporter of the S.V.A., created the sign and he is holding it.  Marsha's death, although investigated by the NYCPD and ad hoc committees, remains a mystery and an enigma, just like the transgendered life of Marsha!

Some Background by Some G.L.B.T. People as to Why there were Ultimnately Two Marches
a.k.a. When Fellow Gays Shamefully Ignore the legendary Stonewall Veterans, There's a Price -- or Two -- to Pay!!
www.NYTimes.com/1994/05/06/NYRegion/remember-Stonewall-but-how-Gay-Groups-clash-over-Commemoration.html 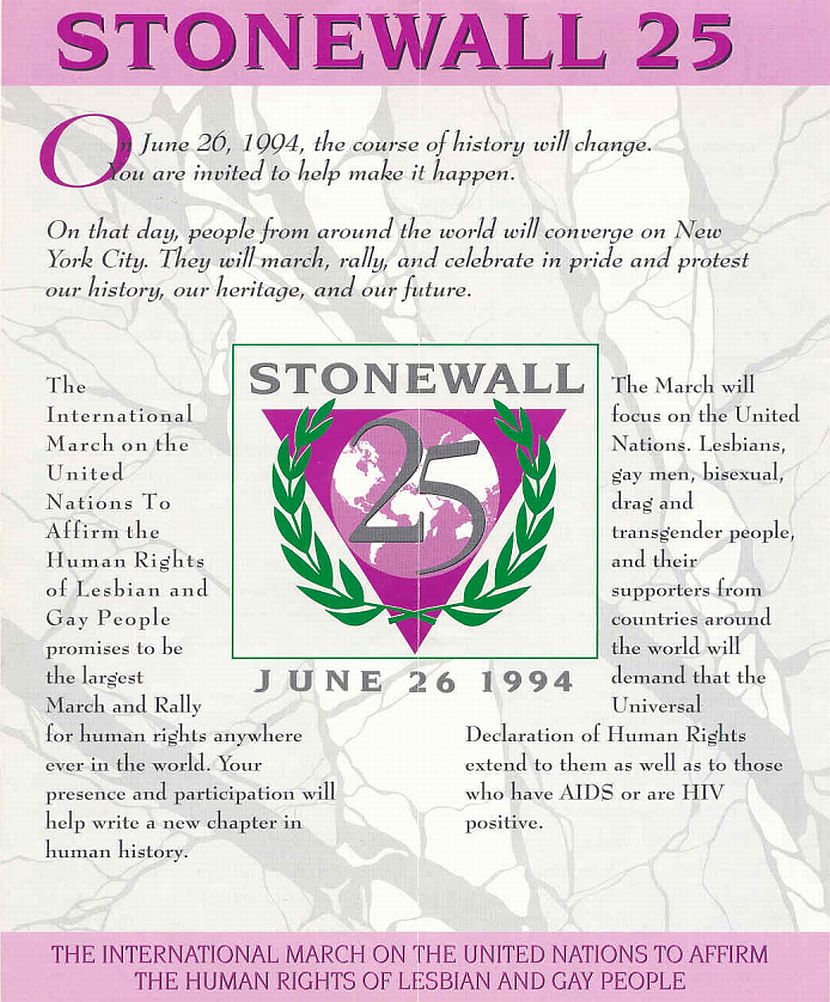 'Queer' Note:  The "International Stonewall-25 Committee" incredulously referred to the community as "L.G.B.D.T."?!  These soupy letters are shamefully historically wrong, besides stupid, and chronologically inaccurate -- especially on a long-awaited anniversary day of celebrating our true history.  "Stonewall" the rebellion and the civil rights movement that was launched was inclusively about "Gay Rights", "Gay Power" and "Gay Unity" not 'Alphabet Soup' created a decade later by bored and boring revisionists.  And, what in their "LGBDT" the hell is the "D"?  Divorced?  No!  Dyke?  No!  It's Drag"!  OMG!  They were more whacked than we knew....  Can you imagine that people allegedly in the "community" -- though from California -- didn't know that "drag" (an unappealing word by itself) is considered part of the "Transgender" community?  Obviously, not!  Read their brochure. 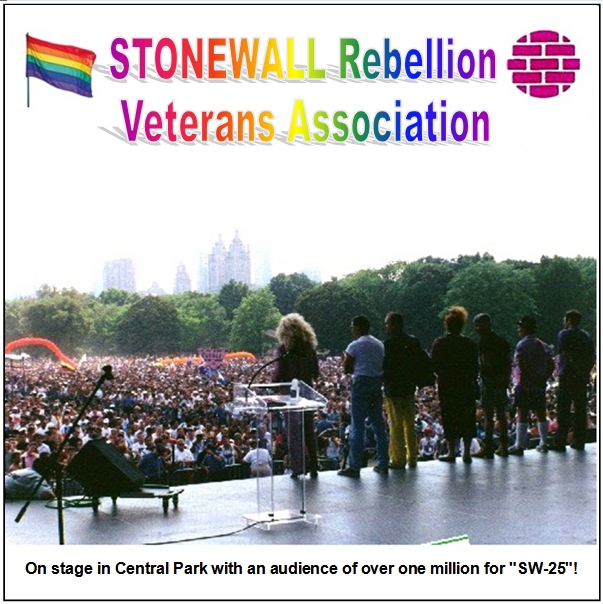 Members of the STONEWALL Rebellion Veterans Association ("S.V.A.")
broadside the huge stage for "Stonewall 25" on the Great Lawn in Central Park,
Manhattan, New York City, with an excited audience of over one million people
by New York City Police Department professional estimates!
[Photo by Leigh McManus of the STONEWALL Vets Assn.]

For more 411 on the STONEWALL Veterans' Association's Founder
and "Leader Of The Pack" Willson Lee Henderson, visit
:  https://www.StonewallVets.org/WillsonHenderson.htm