"We Remember The Stonewall!"
Ultimate Gay Pride:  The Stonewall Veterans, the Stonewall Car, the Gay Pride Parade
(Note:  The "36" you see on the car is actually the booklet's page number.) [Photo credit:  Heritage of Pride's "GLBT Pride Guide"] 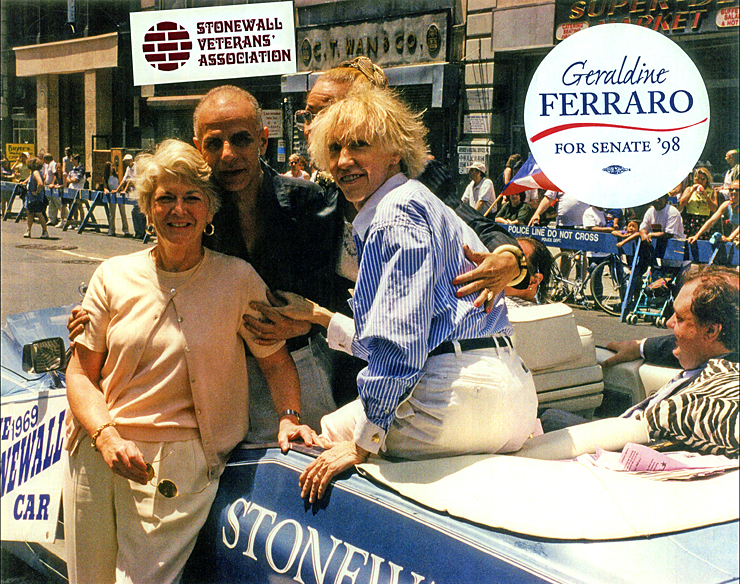 Proudly pictured upper right:  The Bronx Borough President Fernando F. Ferrer, as per his request, behind the wheel of the classic 1969 convertible "Stonewall Car", with the Imperial QUEENS & Kings of New York's Princess Jenni Egan and Countess Cindy Chan and the STONEWALL Rebellion Veterans Association Founder and President Willson Henderson.  The SVA's bigga Chief-of-Security Amir Qaharr (from River Park Towers in The Bronx) is in the passenger 'shotgun' seat.  The occasion is the parade line-up on the Grand Concourse for the first annual Gay Pride Parade in The Bronx on Saturday, July 11th, 1998 -- proudly led by the SVA's Willson, the legendary STONEWALL V.A. and the famous "S/W-Car".  Some Stonewall veterans not pictured include Rev. Magora Kennedy (residing in The Bronx), Bert Coffman (formerly of The Bronx), Ramon Bellido (also formerly of The Bronx) and Janine Hakim and her girlfriend Crystal Paris (both from The Bronx)!  To quote a popular Bronxism:  "The Bronx is in the house!"