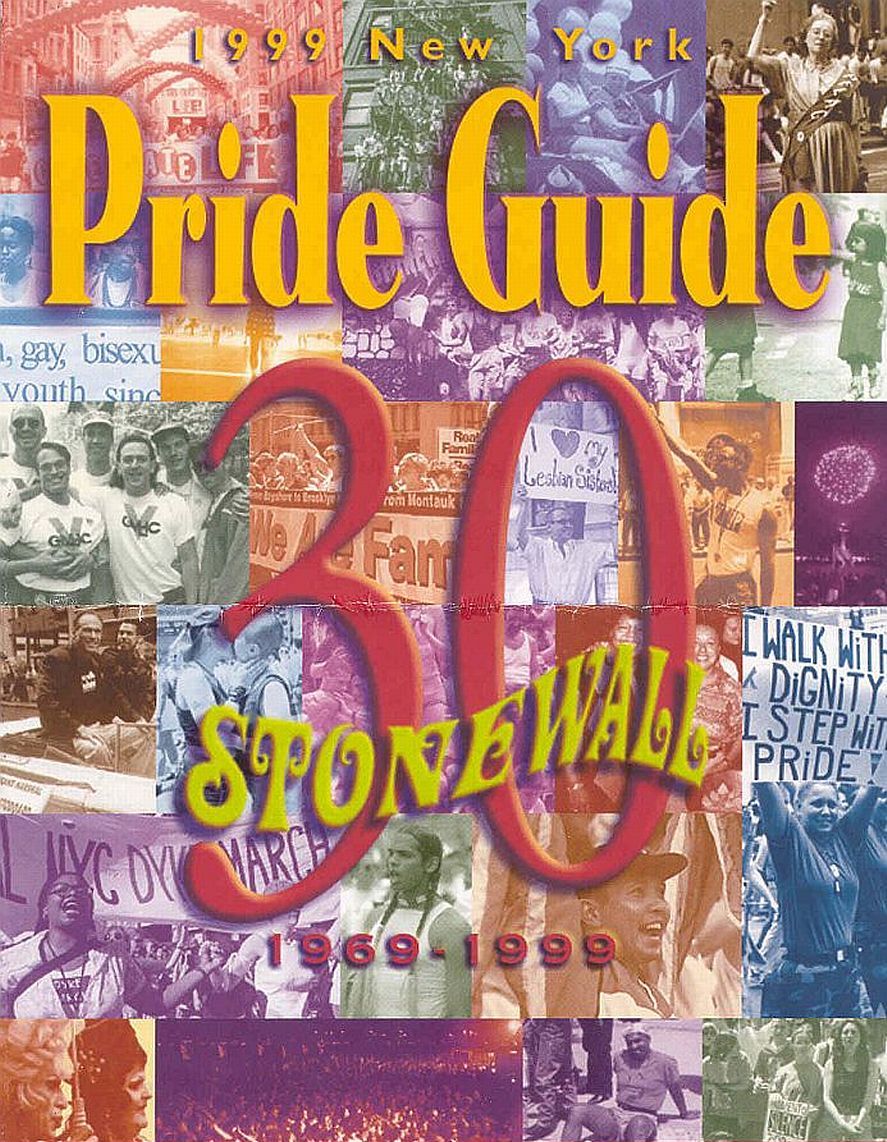 Pictured stonily in "NYC Pride Guide" in the lowest left and oddly subdued are S.V.A. Stonewall veteran Drag Queens (D/Qs) Ivana Valentin (left) and Daria Modon.  The Heritage of Pride ("HOP") rudely failed to mention inside their booklet (above) the names of the gals nor fact that both are members of the proud STONEWALL Rebellion Veterans Association.


Interviewees:  Willson Henderson and Jeremiah Newton of the S.V.A. and Donna Red Wing of the H.R.C.

"Stonewall was the first time that I saw in a public way my (Gay) community fighting back" said Donna Red Wing, national field director for the Human Rights Campaign ("HRC").  Here we are 30 years later and the battle is not so much in your face and in the streets.  It's in The Capitol!  It's in town hall!  It's in the voting booth!  Gay, lesbian, bisexual and transgendered ("G.L.B.T.") people have begun to work in the system...................."

Red Wing said the battle continues but the demands are basic:  "We want to live our lives free from discrimination and free from violence".

"The heroes are the folks that we probably won't see in Time or Newsweek", said Donna Red Wing of the Human Rights Campaign.  "It's the folks who are on the ground, in the trenches, making a difference...."  Maybe folks like Williamson "Willson" Henderson, who was inside The Stonewall and arrested after the first night of the rebellion (sic).... He'll never forget the night he helped give birth to the Gay Rights movement.  Stonewall helped unite Gays and lesbians, eventually growing into a powerful force, felt in all reaches of the national spectrum.  "Stonewall was the first time I saw in a public way my GLBT community fighting back", said Donna.  And, from the SVA's Jeremiah Newton:  "Yes, we were part of the Stonewall Rebellion.  Yes, we survived.  Yes, we're still here....  It starts with one person standing up for their rights and the rights of their loved ones.  That's Stonewall!  It's an amazing, amazing story...." reflected Jeremiah.  Do they consider themselves 'heroes'?  "Well, I never regarded myself as one", Willson said.  "None of us regarded ouselves as 'heroes'.  We were all victims of happenstance", he said.  "But, after all these years, I think, yes, come to think of it, we are 'heroes'". 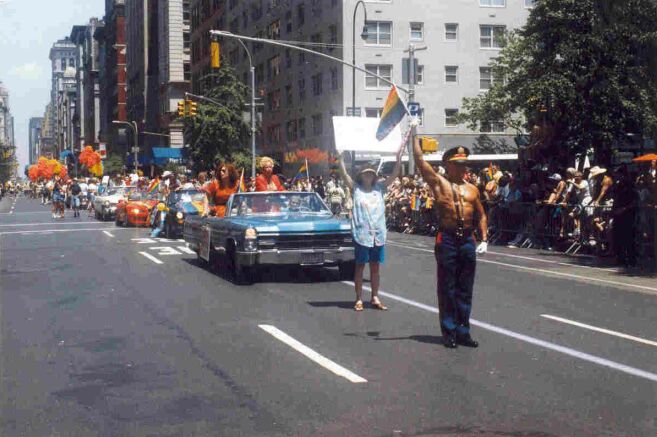 STONEWALL Veterans' Assn. Flotilla of N.Y.C. Gay Parade Convertibles
Note:  The above 1966 Cadillac is not the 1969 Cadillac "Stonewall Car"!
Observe that the 1966 has stacked (not horizontal) headlights!!
[Photo by Willson L. Henderson] 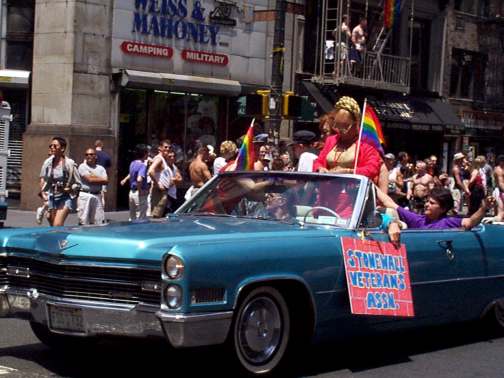 Hey, H.O.P., You All are Wrong -- This is NOT the "Stonewall Car"
Note:  That's a reference when SVA-ers went to a HOP meeting and
in a hands-up survey of the pic, they all thought it was the S/W-Car!
The turquoise Cadillac in the photo with stacked headlights is a 1966!
[Photo by Leigh McManus] 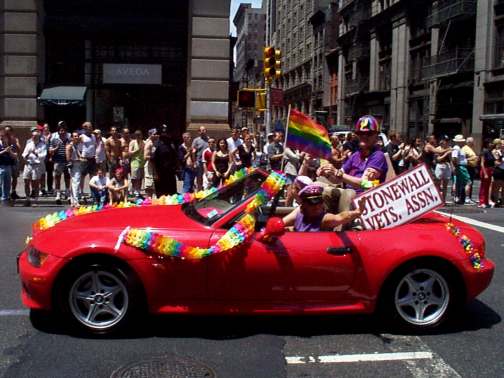 King Storme rides for first time (always walks) in any Gay parade
Debbie Fierro holds the S.V.A. Sign that She and her Girls made
[Photo by Electra O'Mara] 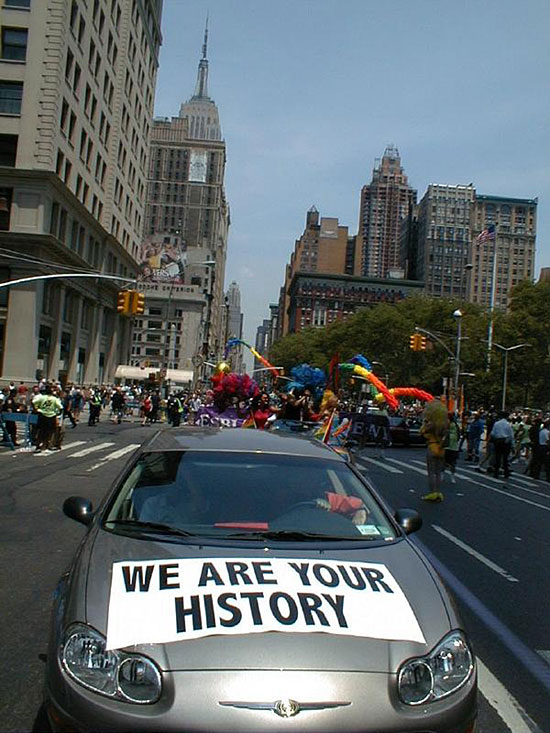 S.V.A. Car #6 is the "We Are Your (Gay) History" Chrysler Sedan
Notice {upper left}:  the top of the Empire State Building
[Photo by Leigh P. McManus for S.V.A. Archives] 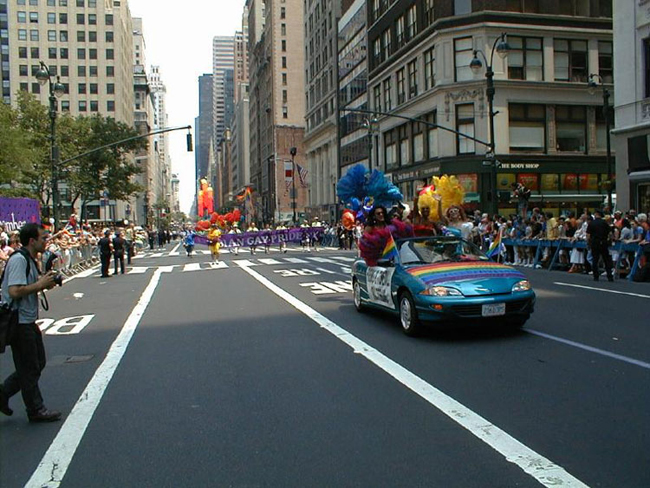 Car #7 in the S.V.A. Flotilla:  1996 Thunderbird Convertible is
chock-full-of-Drag-Queens evoking a "Spirit of Stonewall"
[Photo by Leigh McManus for S.V.A. Archives] 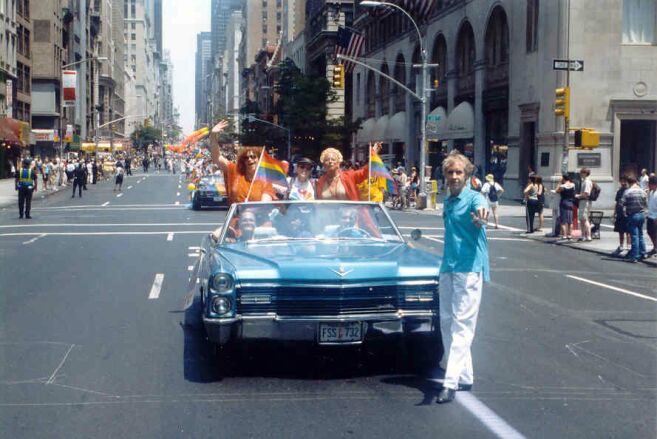 "Stop!  In the Name of Stonewall"
[Photo by Electra O'Mara] 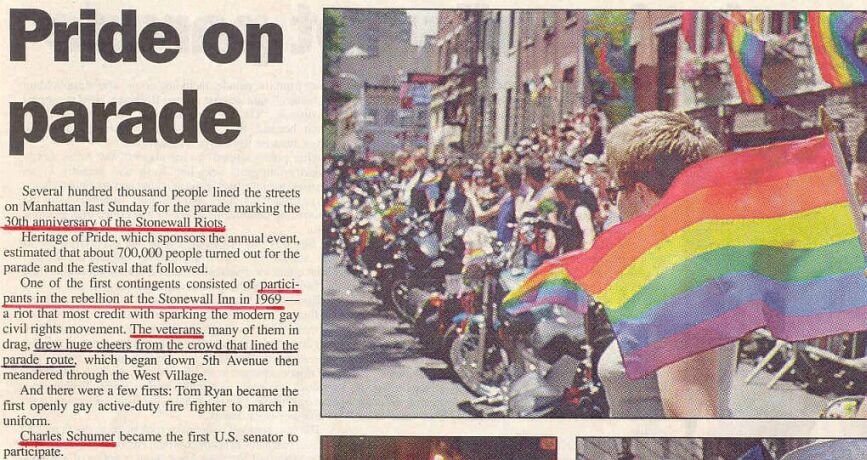 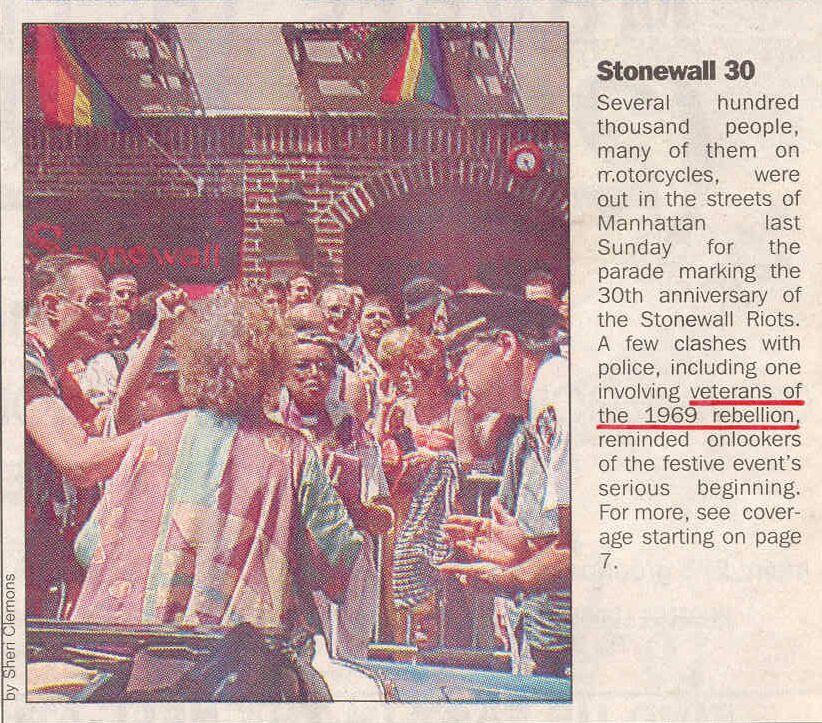 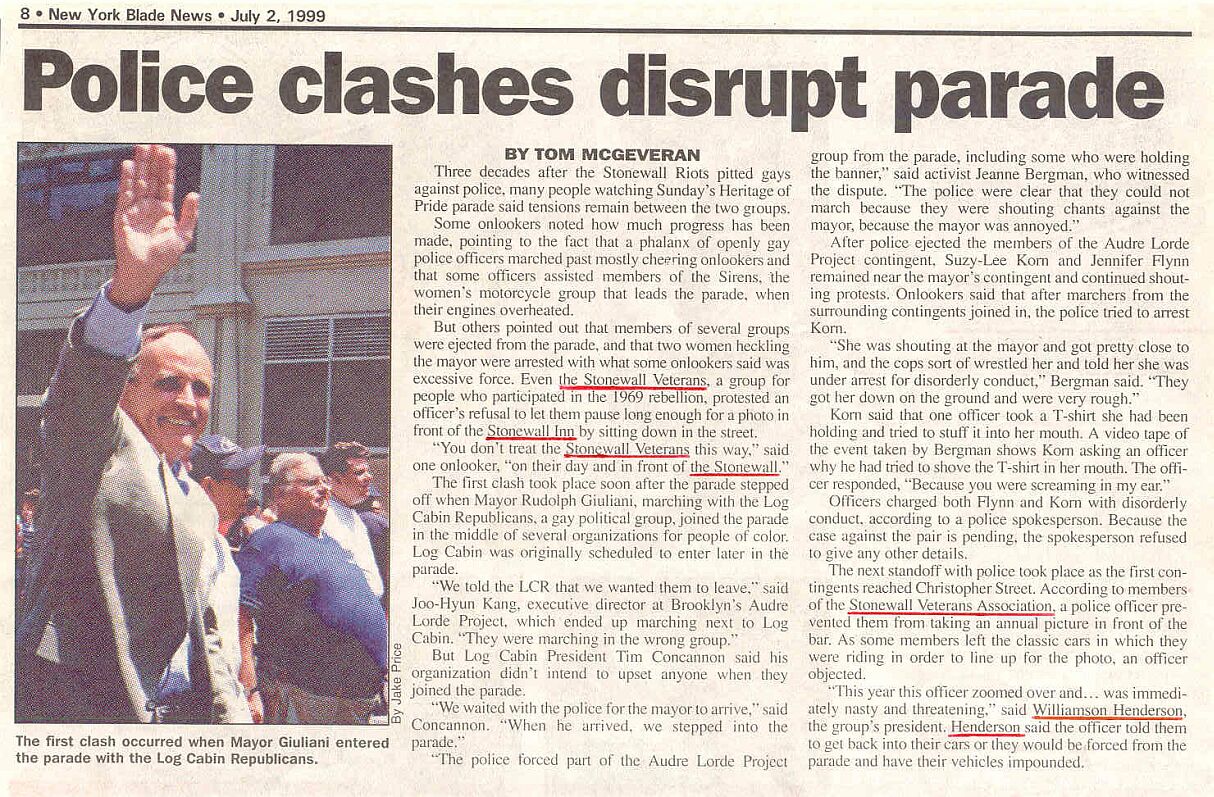 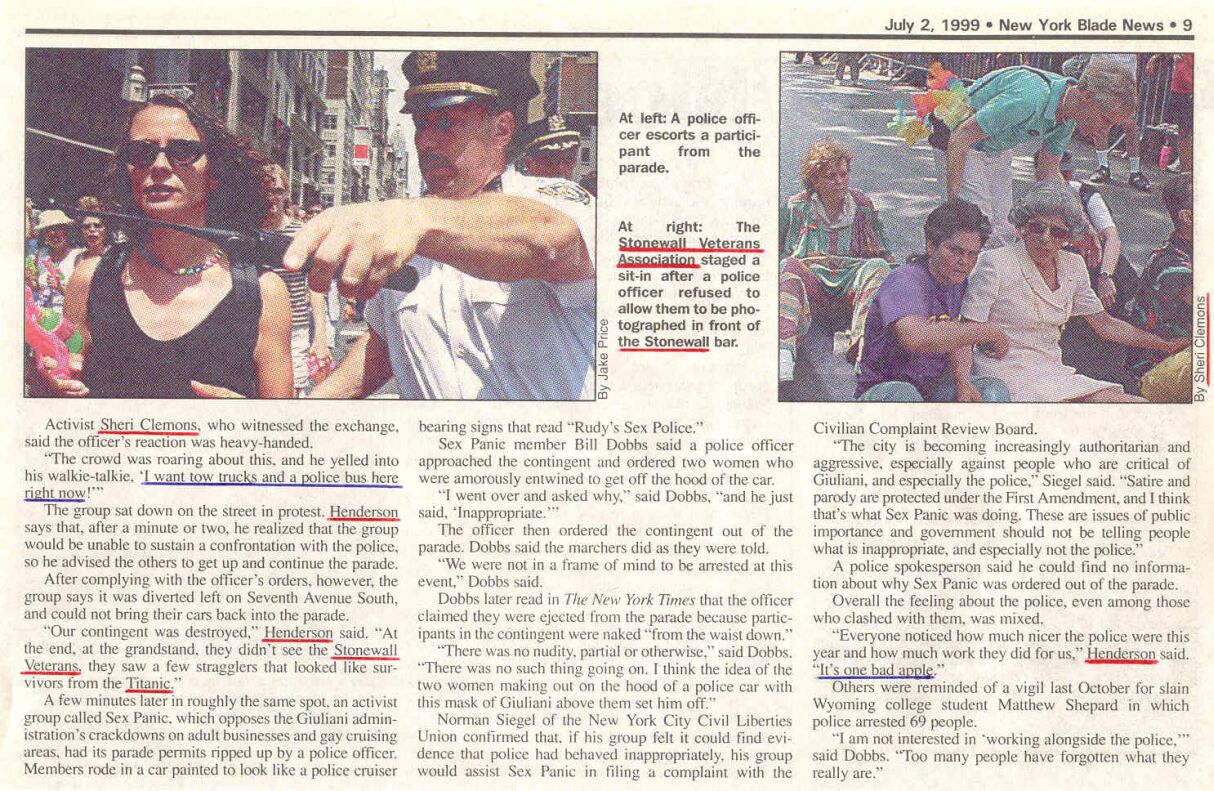 "You are (supposed to be) our Future!"
Note:  Unfortunately, NYC Gay youth rarely do anything for the SW-Vetz
-- not even write envelopes, make phone calls or attend educational forums! 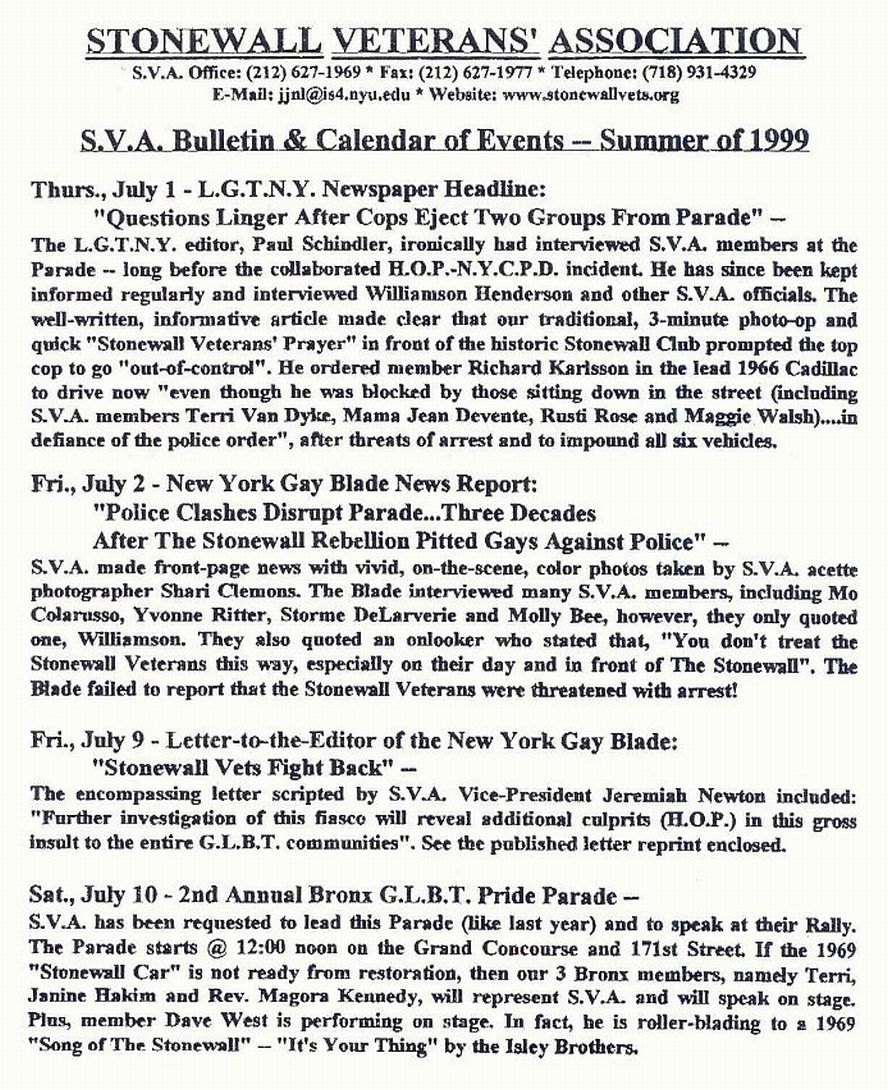 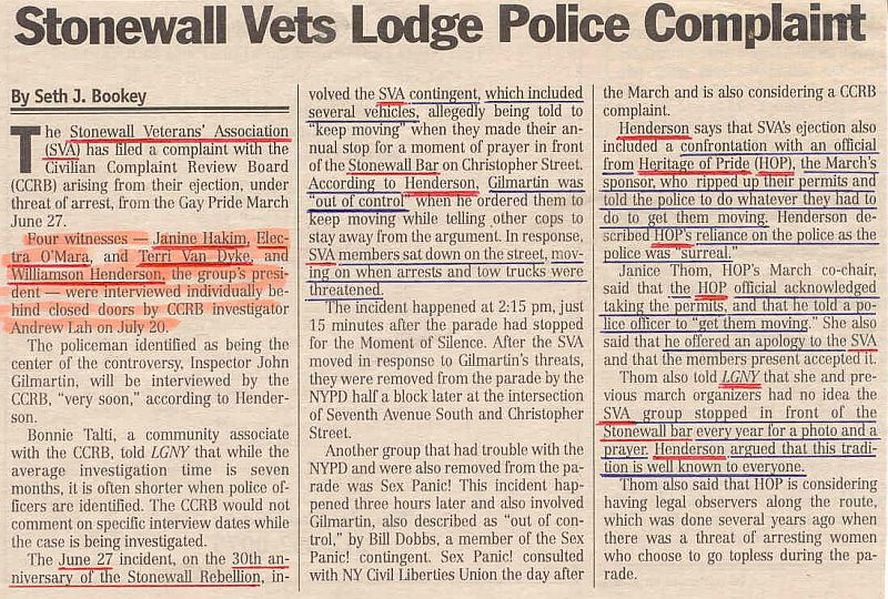 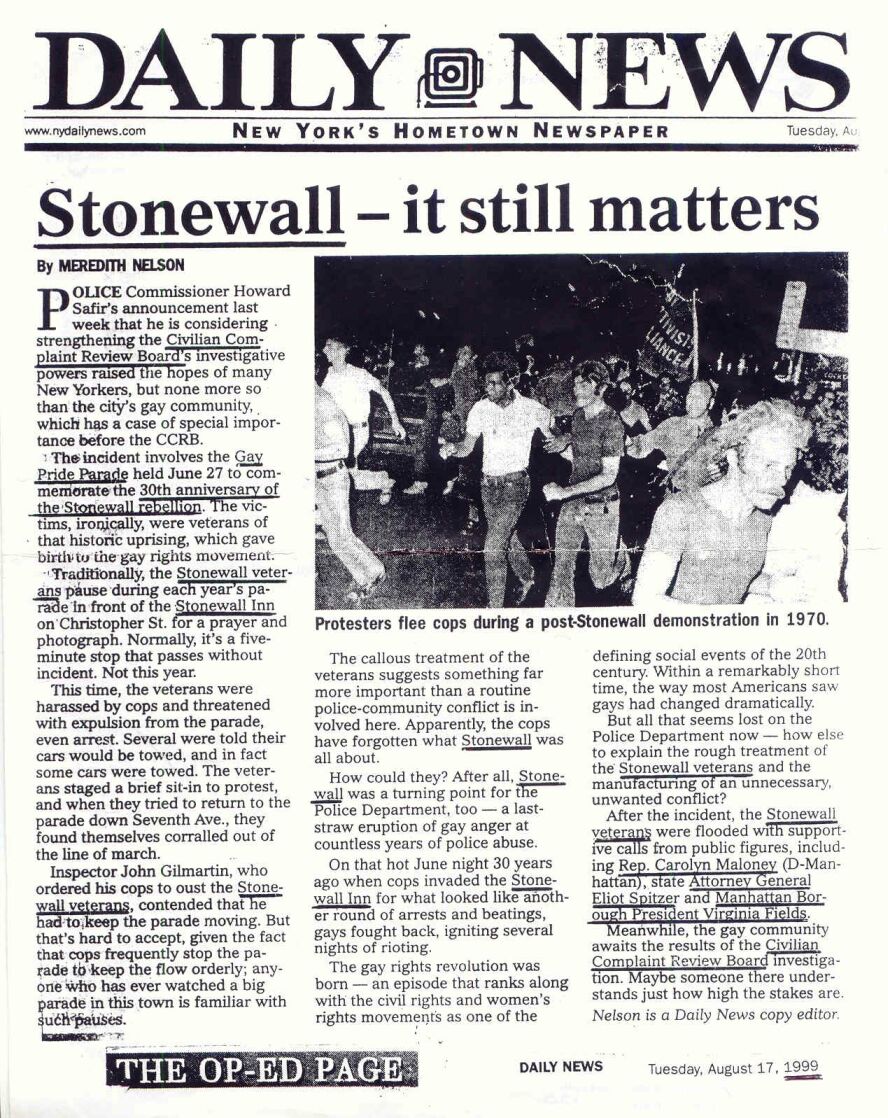 "The City's Gay community has a very special case before the CCRB."  The Gay discrimination case against the New York City Police Department ("NYCPD") was brought by the STONEWALL Rebellion Veterans Association ("S.V.A.") and registered with the New York City Civilian Complaint Revue Board ("CCRB") in addition to sending out registered letters to public officials and S.V.A. officials, members, supporters and advertisers as well as conducting public press conferences on the steps of City Hall and issuing press releases.  Quoting S.V.A. founder Willson L. Henderson, the police, much as they tried, didn't intimidate or scare us 30 years ago inside The Stonewall Club.  The heroic Stonewall Veterans are not going to allow them to attempt it again thirty years later out front of the same club -- especially during the New York City Gay Pride Parade!  Fahgeddaboudit!"  The timely NYDN article concludes:  "Meanwhile, the Gay community awaits the results of the Civilian Complaint Relw Board investigation.  Maybe someone there understands just how high the stakes are!"