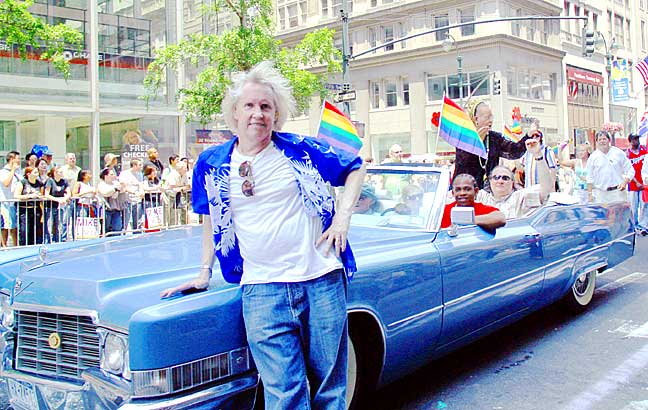 Pictured above, standing alongside the mighty blue 1969 convertible known as the "Stonewall Car" is S.V.A. founder and president Willson L. Henderson.  Riding "shotgun" in the car and partially obscured is S.V.A. ambassador Storme DeLarverie (wearing a blue hat).  "Gay Power" fist-saluting from the backseat is S.V.A. 2nd vice-president Bert ("Biggi Berti") Coffman.  Standing in the car is S.V.A. ambassadress Cristina Santiago Hayworth up from Puerta Rica.  Also in the backseat on the far side is S.V.A. executive committeemember 'Old Rose' Giordano.  Driving the legendary "Stonewall Car" is the proud, red-shirted S.V.A. assistant AnDre Christie -- who is about two decades younger than the car!  Walking behind the "S/W-Car" is Stonewall veteran David Velasco Bermudez and his spouse (not visble) Bob Isadore, down to New York City from Massachusetts.

For more 411 on and pix of the S.V.A. "Stonewall Car" driver, AnDre M. Christie, visit:
www.STONEWALLvets.org/AnDreChristie.htm 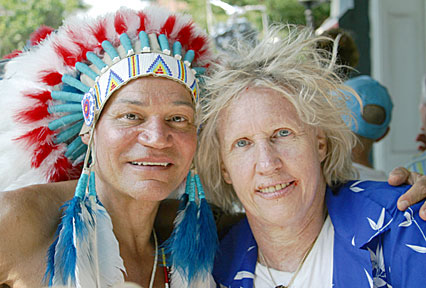 After the Gay Parade:  two sun-beat but happy warriors
[Digital photgraphy by DigitalPhotoPro@aol.com]

Proudly pictured above are Stonewall veterans 'Chief' Dave West the S.V.A. public relationist and Willson Henderson the S.V.A. president.  The sunny scene is after the NYC Gay Pride Parade at the SVA's "Stonewall Duncheon" at the Hudson Corner Cafe on Hudson Street in the West Village of Manhattan.  By the following year's parade, Dave West was sadly deceased!

[Another NYC Pride Parade photo will be placed here!]

P.S.  The "Stonewall Car" was behind them.  AnDre took a driving break!

Any photos, images, quotes, information and remarks at this file or
will be added, if used in any form whatsoever, must be credited to:
STONEWALL Rebellion Veterans Association (S.V.A.)
-- and, if applicable, also name the photographer.