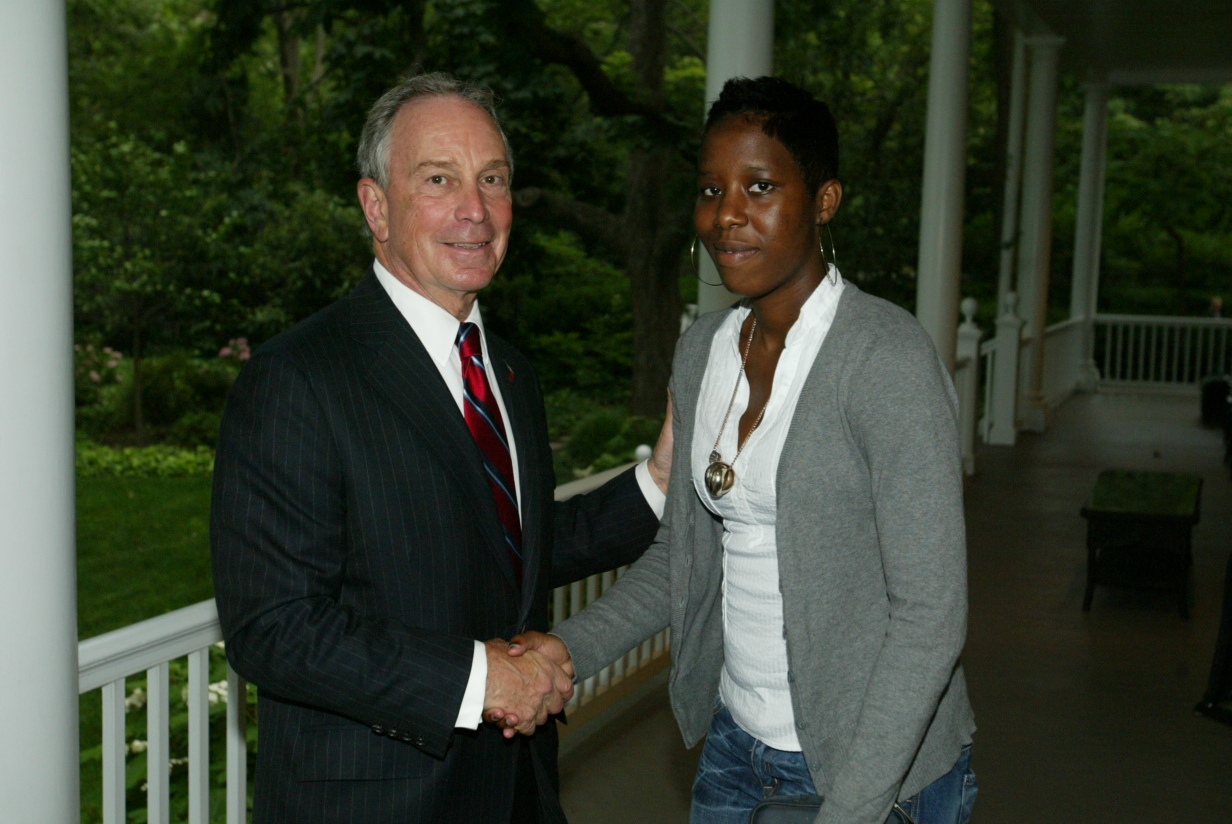 
NYC Mayor Michael R. Bloomberg hosted his out-standing Gay Pride Party -- his 8th -- on June 23, 2009, at Gracie Mansion on the Upper East Side of Manhattan, New York.  The above photo by the S.V.A. webmistress Babsala Lynne is from the 'set' of a poorly-scripted "Gay Game Show" as part of the mayor's event.  Likeable Mayor Michael, like any seasoned actor, smiled while having to present an often-silly text.  Your Gay heart went out to him!  Instead of the vintage television "Hollywood Squares" game show name, someone at New York City Hall not-so-cutely named it "Sheridan Squares"?  No Gay connection with that name!  Since many attendees and most readers herein would not know the origin of that term, it requires explanation.  "SS" references Sheridan Square (actually a triangle), which is a small benched park diagonally opposite The Stonewall Club.  Why could not the scripter think one more inch and named the game "Stonewall Squares" needing no definition and making clear sense on the 40th anniversary of Sheridan -- ooops -- Stonewall!

of the historic 1969 Gay Stonewall Rebellion at the

Stonewall Vets banner on the front of the STONEWALL V.A. Float
[Photo by Hal Weiner]

NOTE:  Heritage of Pride a.k.a. "Heritage of Shame"'s fanatical parade organizers and ruthless self-promoters deliberately failed to list the S.V.A. Float in their distributed "order of march" program!  Was it intentional?  Of course, it was!  Every other group -- all 300+ -- were listed.  Thus, many people and the press at the parade line-up mistakingly believed that the Stonewall vets weren't there!  What?  And, down the road, there wiill be jaded NYC haters who falsely claim that the S.V.A. wasn't there.  They will say: "You weren't in the program"!  Wrong and rude as they frequently are, HOP also known aa HOS failed to apologize for the deliberate omission!  Where's the "pride"?  Once again, shame on HOP!

[Photo by Steven Gradman of PRIDE Dems of NYC]

AnDre Christie, Yetta Kurland and Willson Henderson at The STONEWALL Cabaret Club
[Photo by Rogers A. Huntana for S.V.A.]

Gayly pictured at the "STONEWALL Rebellion Veterans Association's 40th Anniversary Party" at The STONEWALL Club (l-2-r) are:  S.V.A. party host Willson L. Henderson happily celebrating the end of a very long -- and fun -- month of "Stonewall 40" with a grand evening max total of 3 greentinis; Dodge Landesmann from DID Dems joining the Yetta-4-Council campaign (as of tonight) and relishing a spicey laugh about looneytik "Dya-Ria Pastanante Duhr" (a.k.a. looneytick Maria Passanante-Derr), one of Yetta's lying, no-chance opponents; Steven L. Gradman, First Vice-President of PRIDE Democrats of NYC, whose three NYC-wide endorsees are all in the lead; Third District City Council openly-Gay candidate Yetta "Yettl" Kurland, who just picked up three more organizational endorsements and another newspaper nod; the lovely Jeanne Wilcke, the pretty president of Downtown Independent Democrats ("DID"); and the openly-straight First District NYC Council candidate Pete "Dr. Glea" Gleason.  Original music was, ironically, forty years later, the original "Songs of The STONEWALL Club Jukebox" featuring The Shangri-Las, The Rascals, Dionne Warwick, Len Barry, Martha Reeves & The Vandellas, Mick Jagger & The Rolling Stones, Darlene Love, Frank Sinatra, The Chiffons and The Isley Brothers among many other greats!  The fab time at The STONEWALL Club was co-hosted by the captivating AnDre Christie of Youth-4-SVA, who also manned the "S.V.A. Welcome Table".  In the clearly fun picture above, *everyone* is actually looking not at this camera but at the camera about to be snapped by AnDre!

Maurice "Maury the HOP Clown" Michaane looking puzzled and goofy (as usual) as he is 'read' by Stonewall legend -- and party host -- Willson Henderson, founder of the S.V.A.  Maury was 'read the riot act' for his most recent ridiculous lies, idiotic inaccuracies and stupid slander.  Maury also disrespectively, vindictively and foolishly omitted the 40th-anniversary STONEWALL Rebellion Veterans Association with the S.V.A. Float from being listed in the New York City Gay Pride Parade 'line-up' program.  Shame!  Unfortunately, the HOP-ers allowed this fabiscina clown to get away with it (for now).  Shame!  Maury should have been 86'd from the misnomer Heritage of Pride ("HOP").  Shame!  The dysfunctional HOP group also failed to list the annual Stonewall veterans' conference and reunion in their exclusionary "Pride Guide".  At the above S.V.A. event at The Stonewall Club, Maury the HOP Clown wears his personalized clown outfit branding his paltry title at HOP.  Who wears their job and title tee shirt to an event in the evening and at someone else's function?  Maury the HOP Clown is also oblivious to the reality that the Stonewall veterans provided both the "heritage" and the "pride"!!  Maury is so sociopathic that he refused to sign the S.V.A. guest book or make the nominal donation of ten bucks.  Talk about obnoxious, rude and and cheap!!
[Evidence photographed by Rogers Huntana]

Factoid:  Whoever runs for NYC Mayor and advertises in the STONEWALL Newzletta(1969, 1970s, 1980s and 1990s or on the S.V.A. Website (2000s) wins -- John Lindsay, Ed Koch, Rudy Giuliani, Michael Bloomberg!  Whoever doesn't ad with the S.V.A., loses for Mayor (such as Mark 'Gang' Green, Anthony "Hot Dog" Weiner and Christine "C/Q" Quinn)!  At least, it has been that way for five decades!!!!!  What a coincidence!!!!!  With its open multiple campaign strategies and several secret get-out-the-vote techniques plus secret recipes, the S.R.V.A. network does not anticipate that winning tradition to change any time soon!
Election Update:  It didn't change; the SVA's mayoral candidate -- Michael R. Bloomberg -- won once again (and again and again)!!!