There are many reasons why you should "H-E-L-P" the S.V.A. during this difficult world
health epidemic and the dire economic consequences it has caused for non-profit groups!
The G.L.B.T. people of The STONEWALL Club started the uprising -- not the store!
The most important support is preserving the real history of the actual participants in the
launching of the modern G.L.B.T. rights movement known as the Stonewall Rebellion!
In other words, respect and support the people as represented exclusively for a half-century
by the voluntary, non-profit National STONEWALL Rebellion Veterans Association --
not the greedy, non-G.L.B.T. owners of the rented, for-profit "Stonewall" storefront!

Supporting the S.V.A. now ensures our educational programs, our outreach services and our existence! 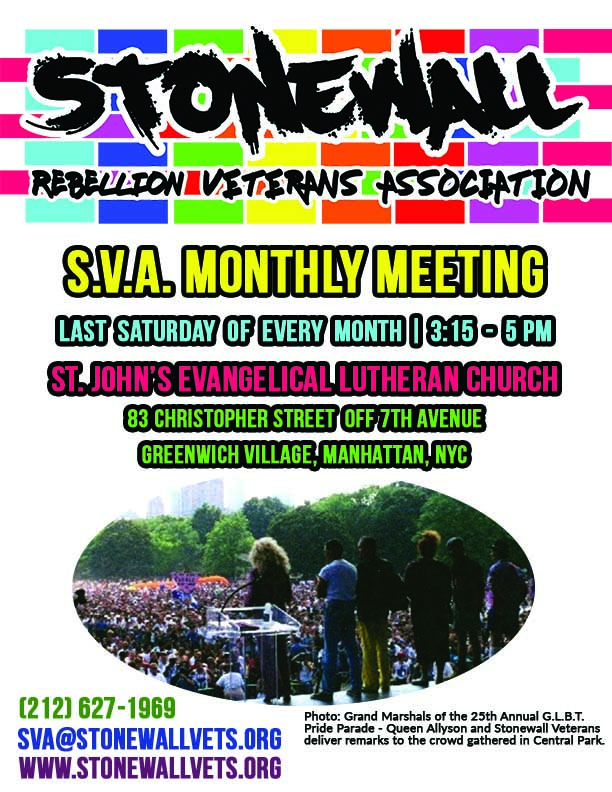 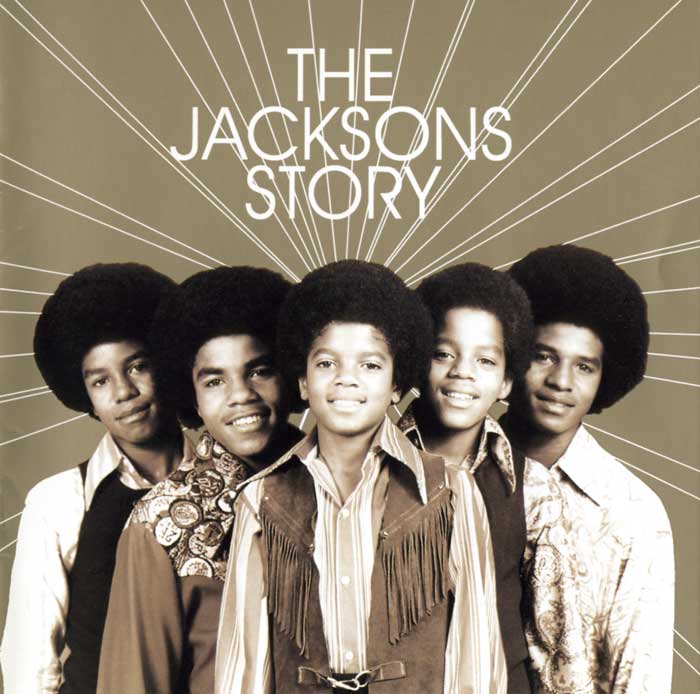 The Jacksons pictured above are:  Jermaine, Tito, Michael, Marlon and Jackie


This super greatest hits compilation spanning a decade includes The Jacksons' debut two-sided #1 hit in The STONEWALL Club Jukebox and all around the world:  "I Want You Back" back/with "Who's Lovin' You".  The compact disc has every one of their succeeding hits, especially the continuance after 1969 with #1 songs which would have fit The Stonewall like a glove.  Those include:  "ABC", "The Love You Save (May Be Your Own)", "I'll Be There", "Mama's Pearl", "Never Can Say Goodbye" and "Dancing Machine". 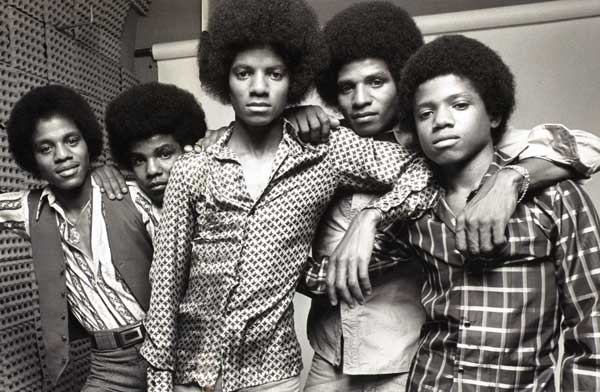 Ronnie Spector  *  She Talks To Rainbows 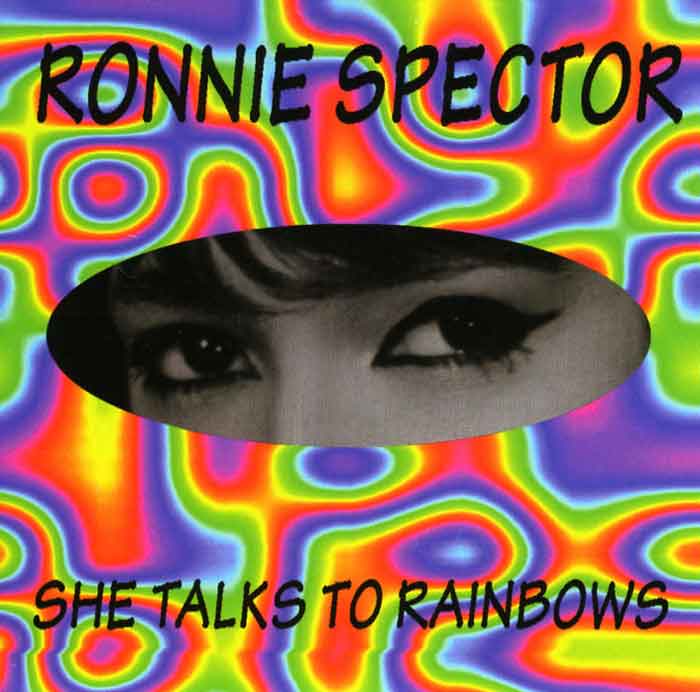 This brilliant (both ways) rainbow album cover has to be the gayest ever!  It is an international and vivid symbol of Gay pride, as our Miss Ronnie Spector knows well.  And, to add the whipped cream to the cake, that "Be My Baby" girl even wears rainbow sunglasses on the back side of the album cover.  Not incidentally, rather recently on March 12, 2007 in Manhattan, New York, Ronnie Spector & The Ronettes (Nedra and Estelle) were inducted into the Rock & Roll Hall of Fame at a huge ceremony at the famed Waldorf-Astoria in Manhattan, NY.  Yes, the girlz performed, including "Be My Baby", "Baby I Love U" and "Walking In The Rain"! 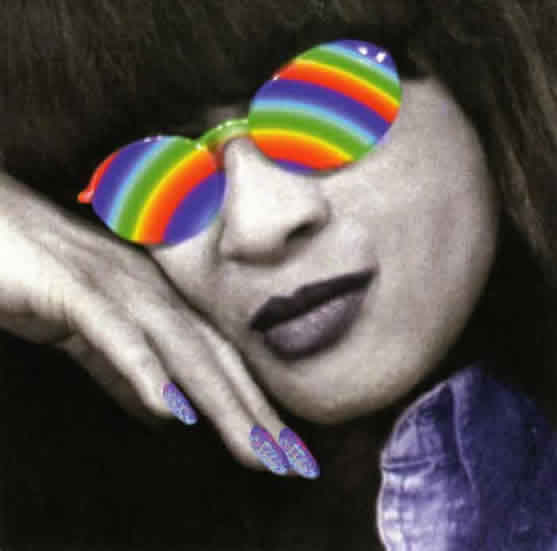 Visit Ronnie Spector & The Ronettes' "Songs of The STONEWALL Club Jukebox" at:
www.STONEWALLvets.org/songsofStonewall-5.htm 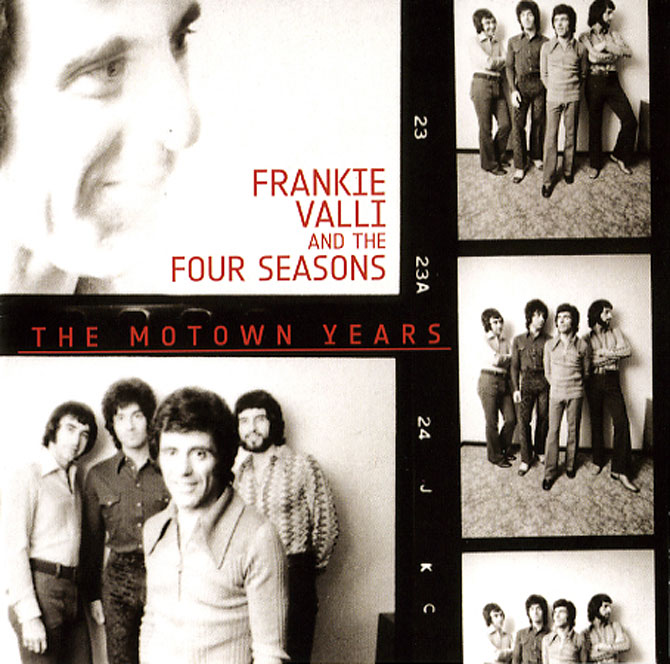 One of the Motown gems -- and a single release -- in this collection is Frankie Valli & The Four Seasons's ("FVFT") version of "Just Look What You've Done".  It is a rockin' 'n' soulin' fast dance song originally a 1967 single recorded and belted out by Brenda Holloway on Tamla Records.  It is pure Stonewall!  In fact, the non-stop driving song had so much going on in it that it was better received in the Gay clubs than it was in mainstream.  Frankie -- who has a perfect feel and zing for remaking female songs such as "Will You Still Love Me Tomorrow" (The Shirelles), "And That Reminds Me" (Della Reese), "Our Day Will Come" (Ruby & The Romantics) and "On The Good Ship Lollipop" (Shirley Temple) -- captures all of the excitement of this pulsating Motown dance song.  Other singles in this FVFS Motown collection include:  "Love Isn't Here (Like It Used To Be)", "Poor Fool", "Walk On, Don't Look Back", "How Come", "You've Got Your Troubles (I've Got Mine)", "The Scalawag Song", "Hickory", "Charisma" and "The Night". 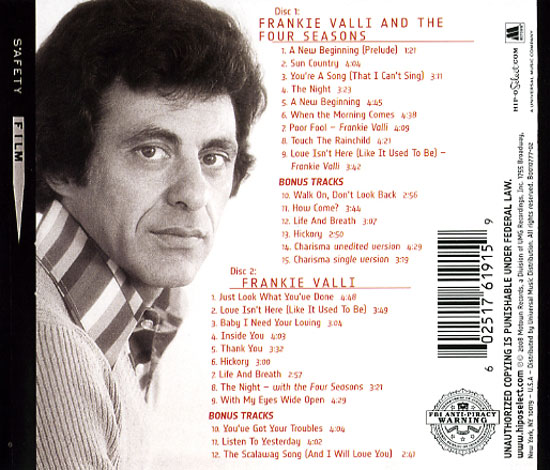 For Frankie Valli & The Four Seasons' "Songs of The Stonewall Jukebox" and 411 on FVFS:
www.StonewallVets.org/songsofStonewall-4.htm

The Velvelettes  *  The Motown Anthology 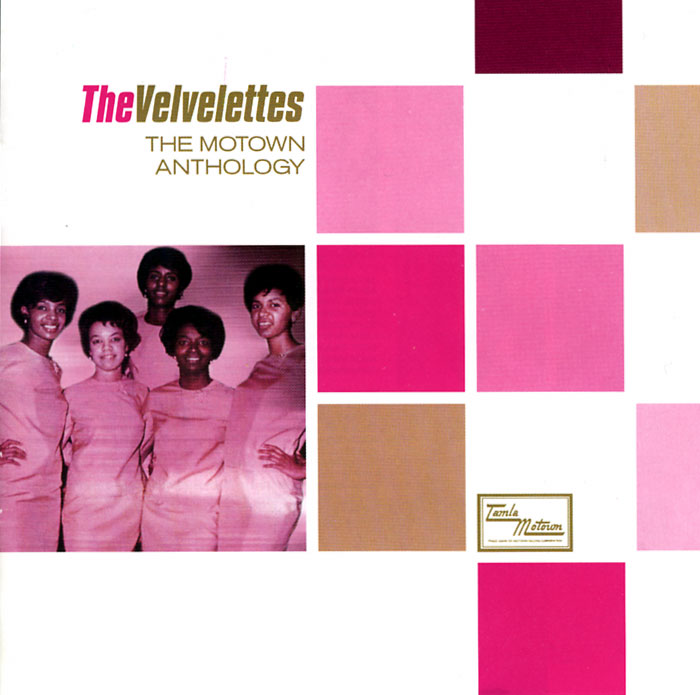 The Velvelettes pictured (l-2-r):  Millie Gill, Norma Barbee, Carolyn Gill (lead singer, standing in the rear), Betty Kelley (when they were a quintet) and Bertha Barbee

On V.I.P. Records, a Motown subsidiary, The Velvelettes appropriately had VIP's first hit record: "Needle In A Haystack"!  That song in The STONEWALL Club jukebox was a favorite "everybody get up and dance" rockin' hit song!  The complete collection above, released by Motown Records in 2005, contains all of The Velvelettes' singles at the original STONEWALL Club and all around the world. 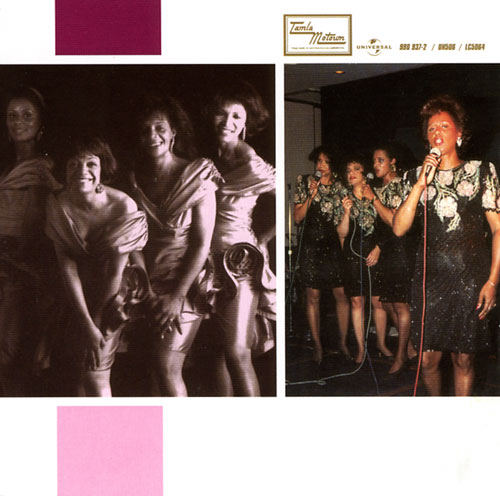 "These Things Will Keep Us Loving The Velvelettes"

For much more on The Velvelettes, view their S.V.A. entry at: 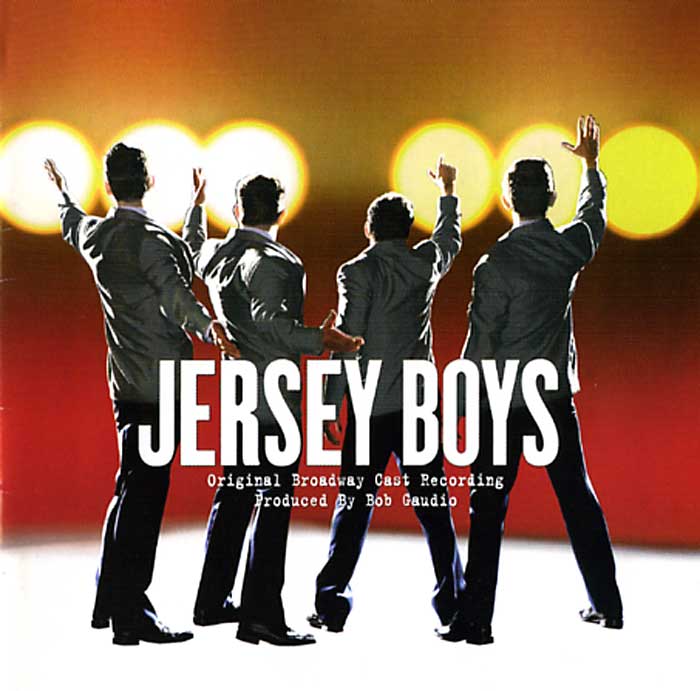 The musical story of Frankie Valli & The Four Seasons was the #1 Broadway musical in 2006 and years later outstandingly continues as a top hit musical:  "Jersey Boys" (JB).  Several Stonewall veterans headed by Willson L. Henderson put a theatrical posse together to see this excellent, entertaining and energetic Broadway musical.  The S.V.A. has repeated the "JB" outing every year that the musical is on Broadway.  "Jersey Boys" has an ear-opening and true story line.  The play traces the "FVFS" boys from their beginning in New Jersey to stardom in New York -- and then the World!  Except for the intermission, the play is non-stop!  The production is great!  For its debut year, "JB" won the coveted Tony award!  John Lloyd Young ("JLY") is highly-talented, motivated and attractive.  His powerful amd convincing falsetto-voiced singing as Frankie Valli is remarkable.  It was great to meet with him after the performance at a post-show party!  JLY hands-down won a Tony award as 'Best Actor in a Musical'.  The SVA's AnDre Christie predicted that they will make the hit play "Jersey Boys" into a movie just like more recent pop musicals such as "A Chorus Line", "Rent" and "Dreamgirls".  Guess what?  They did!

This recording is so Stonewall as it contains several actual "Songs of The Original STONEWALL Club Jukebox".  It was thus thrilling for us Stonewallers as a group to see the riveting performances of many Frankie Valli & The Four Seasons' hit songs that were also in the Stonewall jukebox (1966 to 1969).  Those special songs include:  "Let's Hang On", "Working My Way Back To You", "Don't You Worry 'Bout Me", "C'mon Marianne", "Can't Take My Eyes Off Of You" and "Beggin'".  Of course, there were many more at the original club such as "Tell It To The Rain" and "Will U Still Love Me Tomorrow".  The S.V.A. won with another memorable event related to the "Songs of The STONEWALL Club".

What does "Dreamgirls" the movie have to do with the "Songs of The Original STONEWALL Bar & Dance Club Jukebox"?  Plenty!!!  After all, it is "inspired by" and "based on" a legendary very popular brown female trio -- who unquestionably were the number one artists at The Stonewall!!! 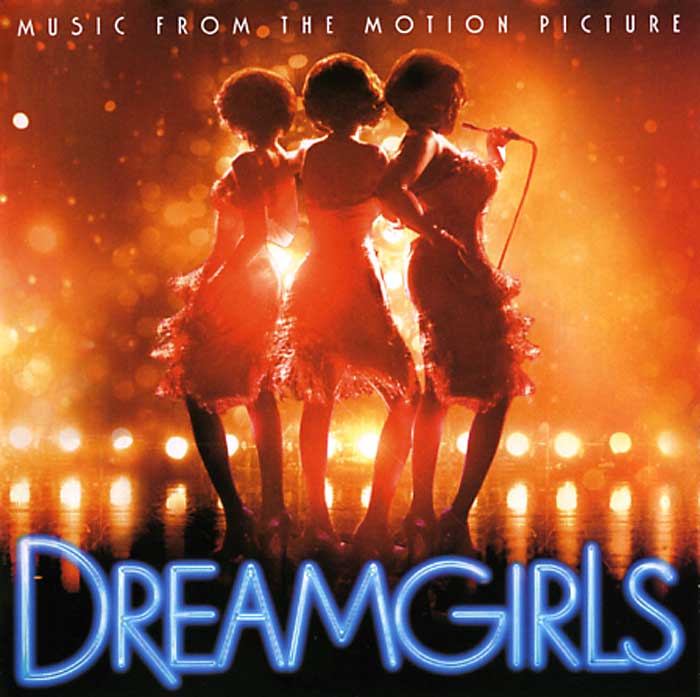 Entertainment News:  "Dreamgirls" scored highest of all movies in 2007 with eight (8) Academy Award nominations.  Since "Dreamgirls" had an incredible three songs nominated for "Best Song", in competition mostly with itself, it could only win one of them at most.  And, that is if the three songs didn't cancel each other out -- which is unfortunately what happened.  In a very diverse and competitive field of nominees, "Dreamgirls" actually won two Oscars!!

The "79th Annual Academy Awards Show" aired on Sunday, February 25, 2007.  The supremely-reviewed and highly-awarded musical movie "Dreamgirls" -- loosely based on the "dreamgirl" lives and record-breaking career of Diana Ross & The Supremes -- was nominated for a supreme eight (8) awards.  That is more nominations than any other film this year!  How many Oscars hooked up with "Dreamgirls"?

On the "Barbara Walters' Oscar Special", prior to the Academy Awards show, in a wide range interview with "Dreamgirls" co-star and Oscar nominee Jennifer Hudson, three photos of Diana Ross & The Supremes were shown -- two of which photos are on this S.V.A. Stonewall website!  The informative interview show also featured a lively segment with Eddie Murphy, another favored Oscar nominee from "Dreamgirls".

A highlight of the Oscars show was the reunion on stage of the three original Dreamgirls -- Deena, Lorrell and Effie -- to fully perform their three Academy Award-nominated songs:  "Listen" (Beyonce), "Love You I Do" (Jennifer) and "Patience" (Anika Noni Rose).  Ironically, the "Dreamgirls" unusual occurrence of 1-2-3 songs nominated from the same movie were predicted to likely cancel each other out.  And, they did!

Although the "Dreamgirls" movie did not win the deserved "Best Supporting Actor" for Eddie Murphy nor creative "Costume Design" or fine "Art Direction" awards and was unfortunately deprived for supreme "Best Song", "D/G" did win for:

* "Best Supporting Actress" (Jennifer Hudson -- she thanked God and so very many others and then God, again, but no nod to the "American Idol" show which discoveredand promoted her nor any mention of her movie character inspiration Florence "Flo" Ballard)

Fortunately, "Dreamgirls" has also won many critical awards from the prestigious Golden Globes -- including "Best Movie Musical" -- and the famed Screen Actors Guild ("SAG") and elsewhere.  The bottom line is the overwhelming connection to and the conspicuous inspiration from the legendary and sensational girl group trio Diana Ross & The Supremes!!!

The Jaxson Gyrlz  *  The Newest Supremes 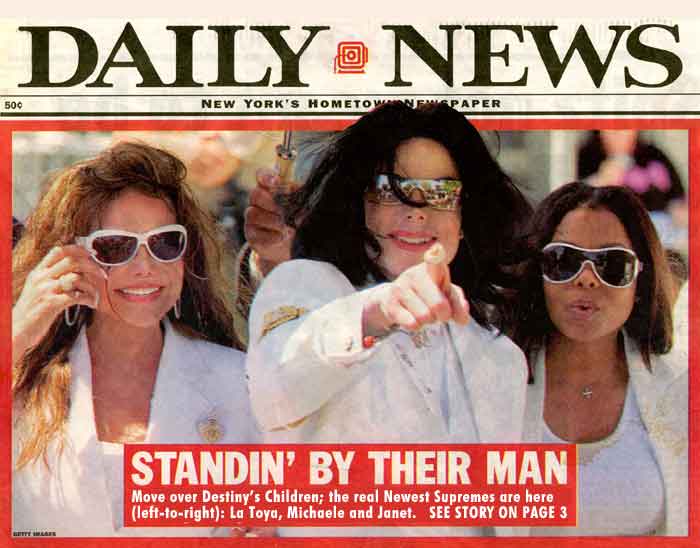 
"Touch" the above button to participate donating via secure  PayPal.
STONEWALL Veterans' Association has the highest level of validation and security!

You can download the S.V.A. support form at S.V.A. Mainpage and mail it to the S.V.A.