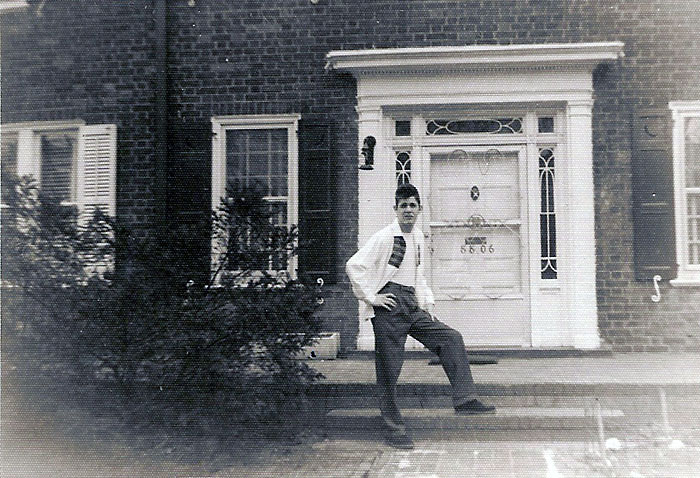 In 1974, David met Bob Isadore.  They have been together ever since that night!  Living in the Cape Cod area of Massachusetts, David became the first Stonewall Rebellion veteran to be legally married in a same-gender marriage.  Dave and Bob were married on the exact 35th anniversary date of the Stonewall Rebellion:  June 27th, 2004........   [much more biography to be posted soon in time for "Stonewall 50"!] 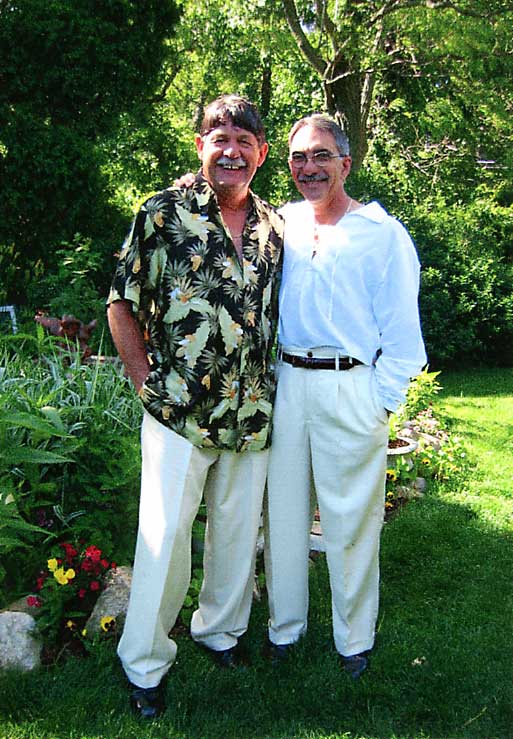 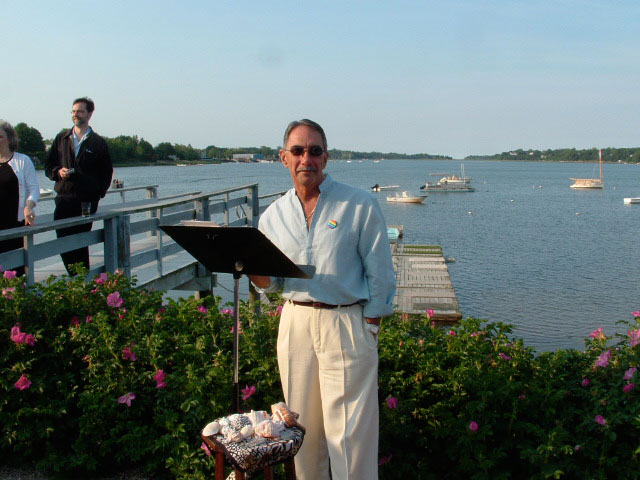 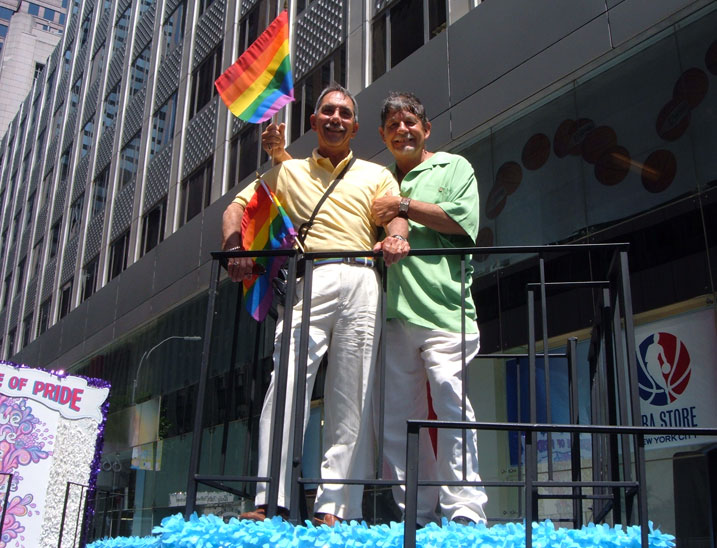 Happy Anniversary to all of my STONEWALL Brothers & Sisters,

June 27,1969, seems like yesterday!  The blue 1969 convertible
"Stonewall Car" looks the same.  Yet, it has been forty years since the loss
of Judy Garland and, now, exactly forty years later, the loss of another
Gay favorite icon Michael Jackson!  I remember well that hot (in all
ways) Friday nigh when the New York City police raided the Stonewall.
All veterans of Stonewall have our personal stories of what happened.
Even the now famous convertible does.  It was grabbed by the cops,
driven away and held captive at the local police station.  One thing is for
sure:  the world has never been the same since!

Over the years, many may have lost touch with each other but the spirit of
STONEWALL will never fade!  We, as veterans, must continue to tell our
story, the true story of STONEWALL.  Too often we hear stories or accounts
of that historical night from people who pretend or think they know.  But you
had to be there as we were to really know what happened.  So, it's our job to
keep the STONEWALL Rebellion Veterans Association alive -- and the
Stonewall spirit flaming.  Keep the fight alive for us Stonewall veterans and for
the next generation.

On this 40th anniversary, we join each other in pride and in remembrance of
our friends who are not here.  I and my spouse Bob look forward to seeing
all of you in Manhattan this Saturday at the STONEWALL reunion of Vetz!


Another Request for Stonewaller David Bermudez

Years ago, my "bucket list" really included meeting a Stonewall Vet!  Well, I finally did!  Forty years ago, while driving along the hills of Western New York, I heard a brief radio announcement commenting on the Stonewall unrest.  I was in the wrong place at the right time.  Since that time, I envisioned the day I would meet a real Stonewall warrior.  At the Unitarian Universalist (UU) Church in Braintree, Massachusetts, on December 10th, 2011, I had the distinct pleasure to hear from an authoritative, non-hearsay Stonewall Rebellion source:  David Bermudez's words on Stonewall.  When I subsequently attended a Taunton Men's Group meeting, located in a Boston suburb, I recounted the experience.  The entire group would appreciate listening to Mr. Bermudez's Stonewall veterans presentation.  To my astonishment, one Gay man in the group never learned about "Stonewall"!  How can we contact Mr. Bermudez?  Does he reside in Boston?  Would he be willing to speak to our small group that meets on Thursday evenings from 7 p.m. to 8:30 p.m.?  Thank all of you in the STONEWALL Rebellion Veterans Association for keeping everything 'Stonewall' alive!

Video Interview for Dave Bermudez's Spouse Bob Isadore
Attached is a video for an upcoming TV series here on Cape Cod.
I will keep you posted on the programs as we proceed.  Somewhere
along the way, I do want to get an interview taped in New York
with you and other SW-Vets and air it here on our MA stations.
I'm new at this, but I am sure there is a way to work it out.

Best to all at the STONEWALL Rebellion Veterans Association.
As always, we will be sending in our annual dues and donation in June
for Gay Pride Month and the anniversary of the great S.V.A.!

Besides longtime married to a Stonewall Rebellion veteran,
Robert Isadore is the revered chairman of the
Yarmouth, Massachusetts Council on Aging.

Regarding the Loss of  the SVA's Ambassador Storme DeLarverie

As you all have heard, this week we have lost a pioneer of the gay rights movement.  I remember when Storme
DeLarverie would be out side the clubs watching to be sure none of us would be harassed when we left.
If someone said or tried anything, it was Storme to the rescue.  In front of the Stonewall Club, whenever the
big blue convertible was out front, Storme took special pride and care in looking out for the 1969 Stonewall
car!  "Don't you dare touch it", warned Storme.

Storme was tough, but always loving, and an example to all of us who were at the Stonewall Club.

Storme stood against prejudice, discrimination and hate!  It is up to us as
Stonewall Rebellion Veterans to carry on his dedication to the movement
for G.L.B.T. equality for all our G.L.B.T. brothers and sisters.

Thank You, Storme, we all will miss you forever.

Please, let us keep in touch with each other.

Stonewall Rebellion veteran David V. Bermudez was reappointed as a member of the S.V.A. Executive Committee.  He is also the SVA's liaison to Massachusetts.  In his home state, David is rightfully nominated as the grand marshal of the Boston Gay Pride Parade on June 13th!  David is a scheduled speaker for the SVA's Annual Conference in New York City on June 20th.

Message from the S.V.A. director for D.V.B. as Grand Marshal of Boston Gay Pride

Vote 4 *DAVID BERMUDEZ* as Grand Marshal!  See below link!
You can see David and his spouse Bob Isadore's SVA webfile at:
Greetings:

The STONEWALL Rebellion Veterans' Association ("SVA") has a
nominee for 'Grand Marshal' of the Boston Gay Pride Parade!
Boston started having their Gay Pride parades just 2 years
after the Stonewall Rebellion.

Vote 4 *DAVID BERMUDEZ* as Grand Marshal!  See below link!
U can see David + his spouse Bob Isadore's SVA webfile at:
www.STONEWALLvets.org/DavidBermudez.htm
Please vote here:
http://www.BostonPride.org/marshals
Be sure to have your e-mail address spelled out correctly.
There's a place to provide your zipcode.  Anywhere is okay.

Many of U know David & Bob from prior S.V.A. conferences.
FYI, they will both be down to NYC to an S.V.A. pre-Pride
monthly meeting.  D&B will also be here for the "SVA's 46th
Annual Conference & Stonewall Reunion" on Saturday, June 20
-- plus the NYC Gay Pride Parade on the following weekend!!

The S.V.A. is so proud that 1969 Stonewall vet David Velasco Bermudez was nominated and won out of five candidates as the Grand Marshal of the 2015 Boston G.L.B.T. Pride Parade in Massachusetts!
Congratulationz, David!
* 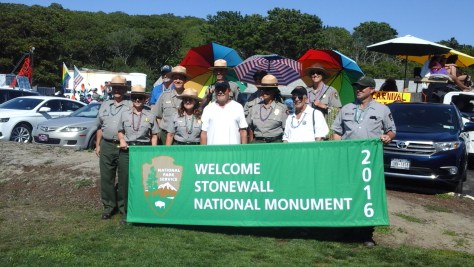 On August 18th, Stonewall Veteran David Velasco Bermudez and myself
Bob Isadore were invited by the Cape Cod National Sea Shore / National
Parks Division to participate with them in their entry in the annual
Provincetown Massachusetts Carnival Parade celebrating the naming of
"STONEWALL" as the first federal G.L.B.T. national monument.  Our SVA-
inspired float entry won the Heart Strings Award for the moving tribute by
the National Parks and Monuments Service to the GLBT community and
specifically the veterans of the 1969 STONEWALL Rebellion and for their
contribution to modern GLBT movement! 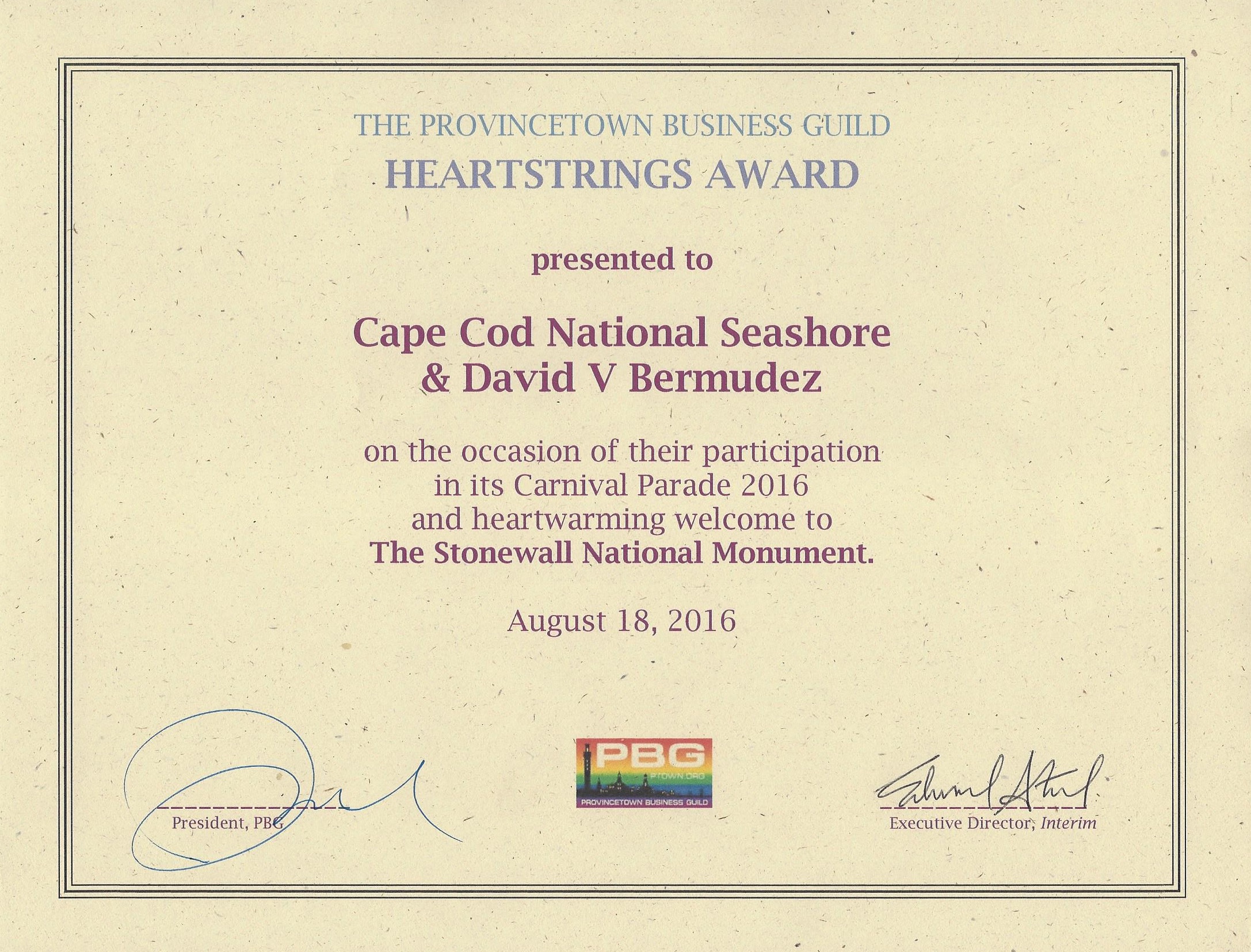 The SVA's longtime and proud member David Velasco Bermudez and his husband Bob Isadore will be marching as a Stonewall Veteran and spouse and with their contingency carrying a STONEWALL Veterans Association banner in both the Boston GLBT Pride Parade and the Gay Pride Parade in Provincetown ("P-town"), Massachusetts!!  More 411 to follow.....