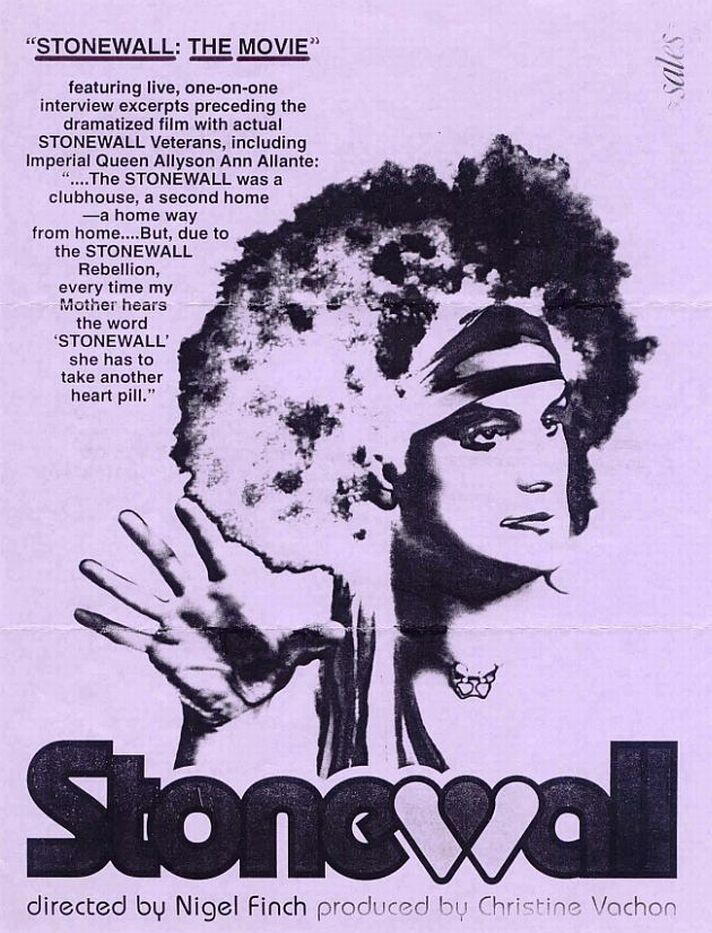 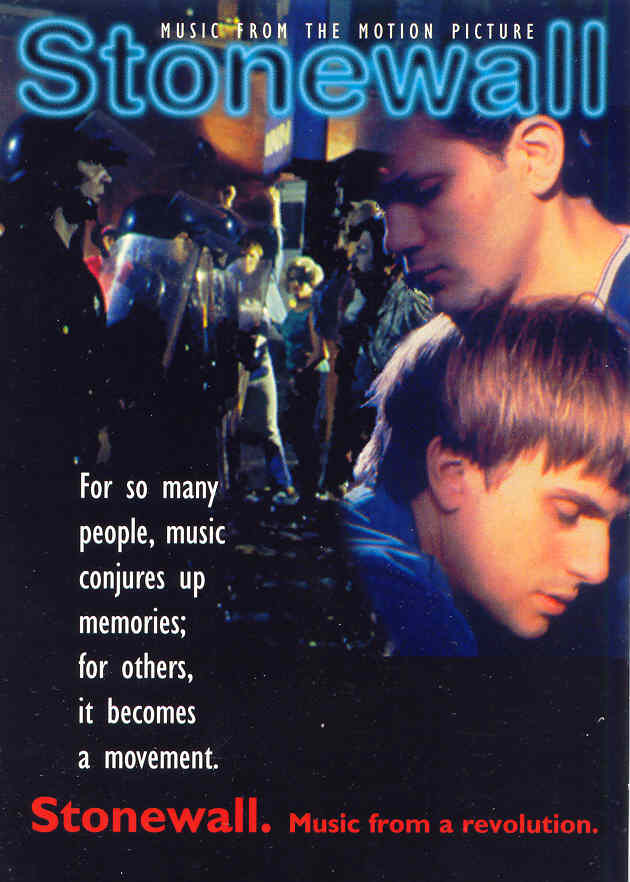 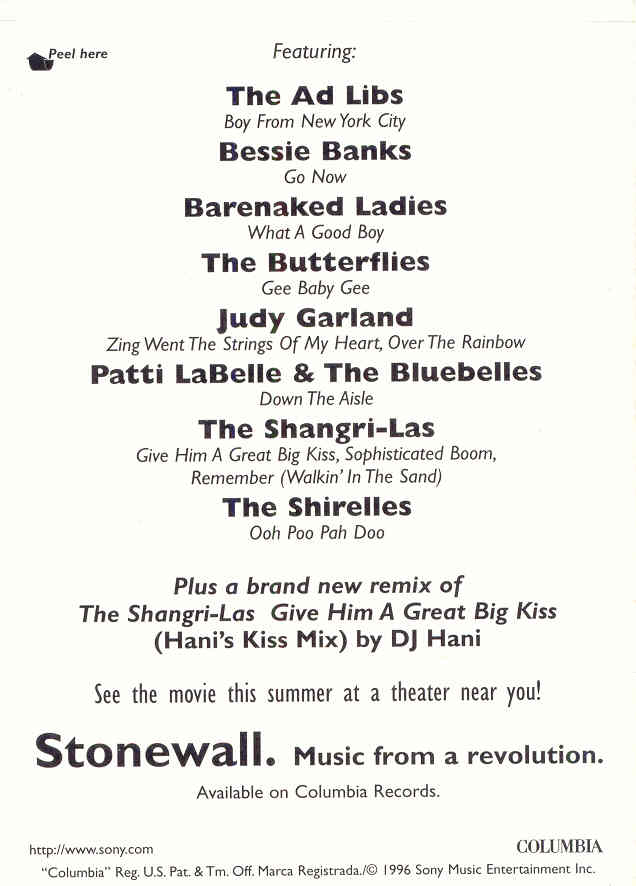 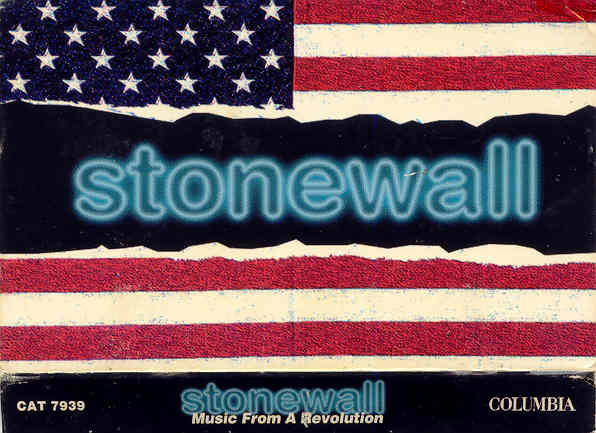 "Stonewall" promotional cassette with two songs and "Stonewall Tributes"
featuring Queen Allyson Ann Allante of the IQKNY and the S.V.A.   *

Queen Allyson in special scene from the first "Stonewall" film (1996) 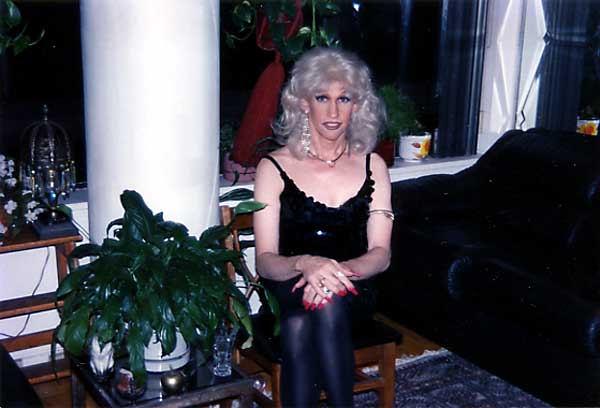 Queen Allyson Allante of the Imperial QUEENS of Greater New York and the
STONEWALL Rebellion Veterans Association in a 'Stonewall Veteran Testimonial'
scene of several actual Stonewall veterans in the drama/musical/comedy "Stonewall"
Note:  Scene was filmed at S.V.A. founder Willson L. Henderson's condominium
at The Bromley on Broadway in the Upper West Side of Manhattan, N.Y.C.
[Photograph by Farrell Jeante Armstrong of IQKNY.]

See Queen Allyson in the "Stonewall" movie for her 'Stonewall Testomonial':
www.Ask.com/youtube?o=0&l=dir&qo=serpSearchTopBox&q=Stonewall+movie+1995 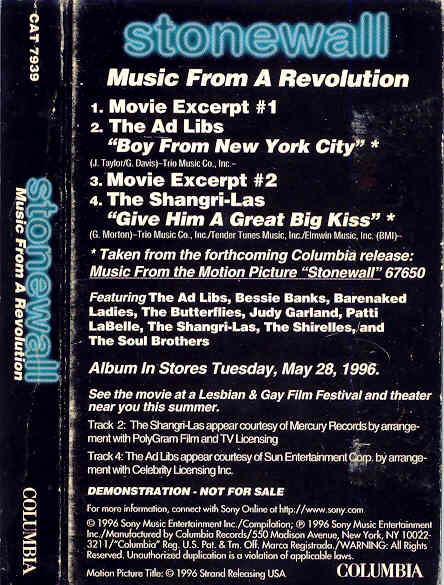 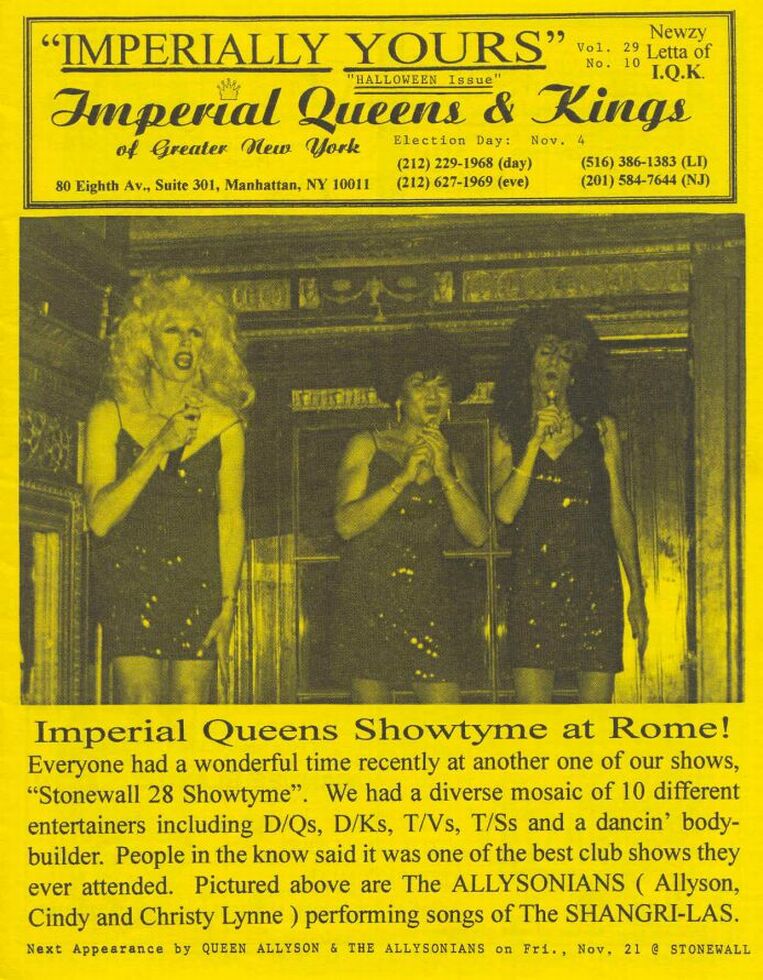 In a tribuite to "Stonewall: The Movie", including all of The Shangri-Las' songs in the film, the Imperial QUEENS & Kings of New York Newzletta shows Queen Allyson & The Allysonians (Cindy Chan and Christy Lynne) ("QAA") performing the good girl / bad boy song "Out In The Streets", which was featured in the "Stonewall" movie.  Other Shangri-Las' songs performed by QAA included:  "Remember, Walkin' In The Sand", "Give Him A Great Big Kiss", "Sophisticated Boom Boom" and "Past, Present And Future" -- all in the movie "Stonewall"!  As a surprise bonus for the audience, the gyrlz steamed "The Train From Kansas City" on track out of the sound system replete with the train's sound effects.  As a special tribute to the Stonewall "sweethearts" -- The Shangri-Las -- entertaining QAA performed an exciting re-enactment on stage of the #1 song "Leader Of The Pack"!

For more 411 on Queen Allyson Allante,
actually appearing in the film "Stonewall" and unforgettably speaking twice
including the memorable and oft-quoted line:
"Every time my mother hears the word 'Stonewall', she has to take another heart pill!",
visit:
www.STONEWALLvets.org/AllysonAllante.htm

www.BBC.co.UK/iplayer/WillsonHenderson/console
There is an original Stonewall song from The STONEWALL Club that the BBC plays
as background music for the introduction of the interview with Willson Henderson! 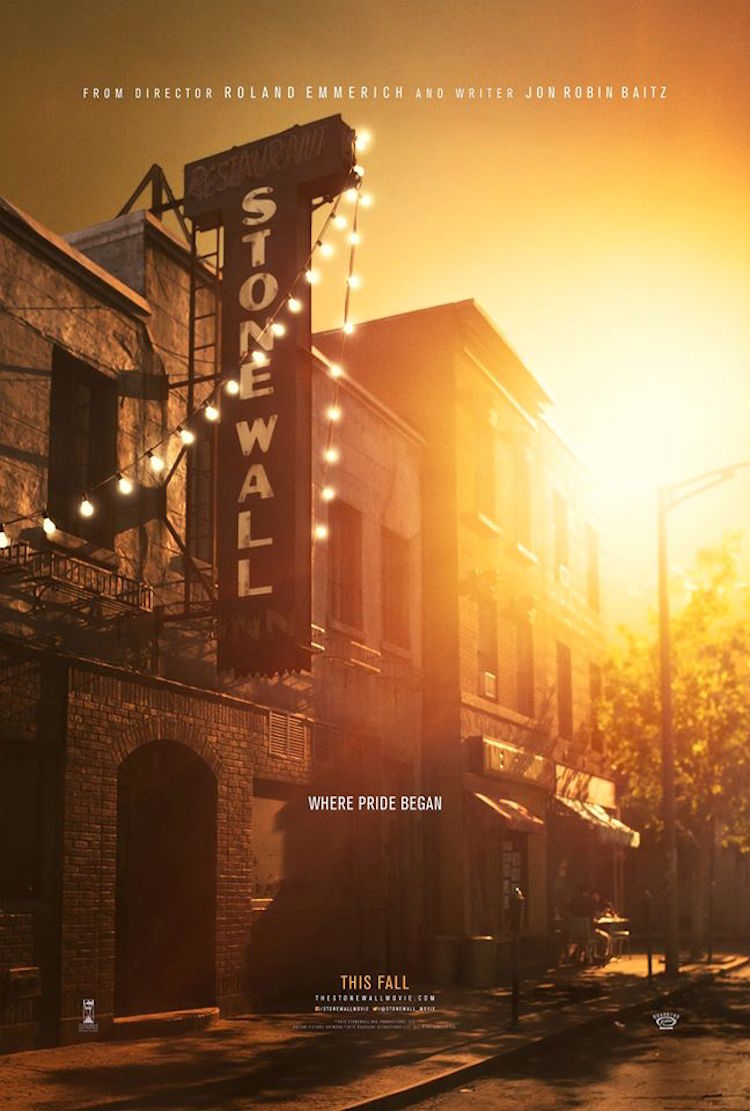 Thanks exclusively to Mr. Roland Emmerich, a brand-new and much-expanded film "STONEWALL!" with a greater scope and bigger budget has been in the planning for years and was filmed in the Spring and Summer of 2014!  The scenario takes place in and around Christopher Street and at the ~original~ STONEWALL Bar & Dance Club in Greenwich Village, New York City, in the Spring and early Summer of 1969.  Filming began, appropriately, during Gay Pride Month in June 2014.  The acclaimed Hollywood legend Mr. Emmerich, who started directing movies at the Gay youth age of 24 and has a filmography spanning four decades, is directing.  Just as the entire Stonewall era, history and legacy has been a passion of the National STONEWALL Rebellion Veterans Association ("S.V.A.") founder and director Willson Lee Henderson ("WLH") for five decades, the "STONEWALL!" film has been a dedicated, determined and personal pet project of movie director Roland Emmerich for several years.

"STONEWALL!" movie's chief producer Michael S. Fossat was the special guest speaker at the STONEWALL Rebellion Veterans Association monthly meeting on Saturday, May 30, 2015.  He provided informative and captivating information about the planning, casting, authenticating, producing and completing of the movie.  Get2gether was chaired by the SVA's director Willson Henderson.  Several other Stonewall veterans such as Bert "Berti" Coffman, Rita "Rusty" Rose, Leigh "L&M" McManus, Joan "Joni" Sobel, Ramon Bellido and Gil "Gil-da" Horowitz (since 86'd) plus Maria "ME" Estevez, a close friend of now deceased but still legendary Stonewall vet Storme DeLarverie, were present and actively participated.  Bruce A. Poli, the S.V.A. Public Relationist was present and at the recent private showing of the "STONEWALL!" movie.  Mr. Fossat's behind-the-scenes interesting and charming presentation was followed with a "Questions & Answers" session from the attendees.  Main issue was questions by members and others about the music in the "STONEWALL!" movie.  The concern is that the songs must reflect the authentic, significant and upbeat music of the 1969 STONEWALL Club jukebox.  Two reporters from The New York Times ("NYX") were present for a story in progress about Willson Henderson and the "Stonewall Car" with a backdrop of the S.V.A.  They referenced the meeting, the movie and the 1969 car in their "Profile" on Willson written by Corey Kilgannon.  It was published in the next Sunday edition (June 7, 2015) of the NYX.  The interesting story included a new photo of the classic 1969 convertible "Stonewall Car".  Local West Village newspaper WestView News ("The voice of the West Village") had a reporter on site.  The elongated and lively meeting was held at the New York City LGBT Community Services Centre in Manhattan, NY. 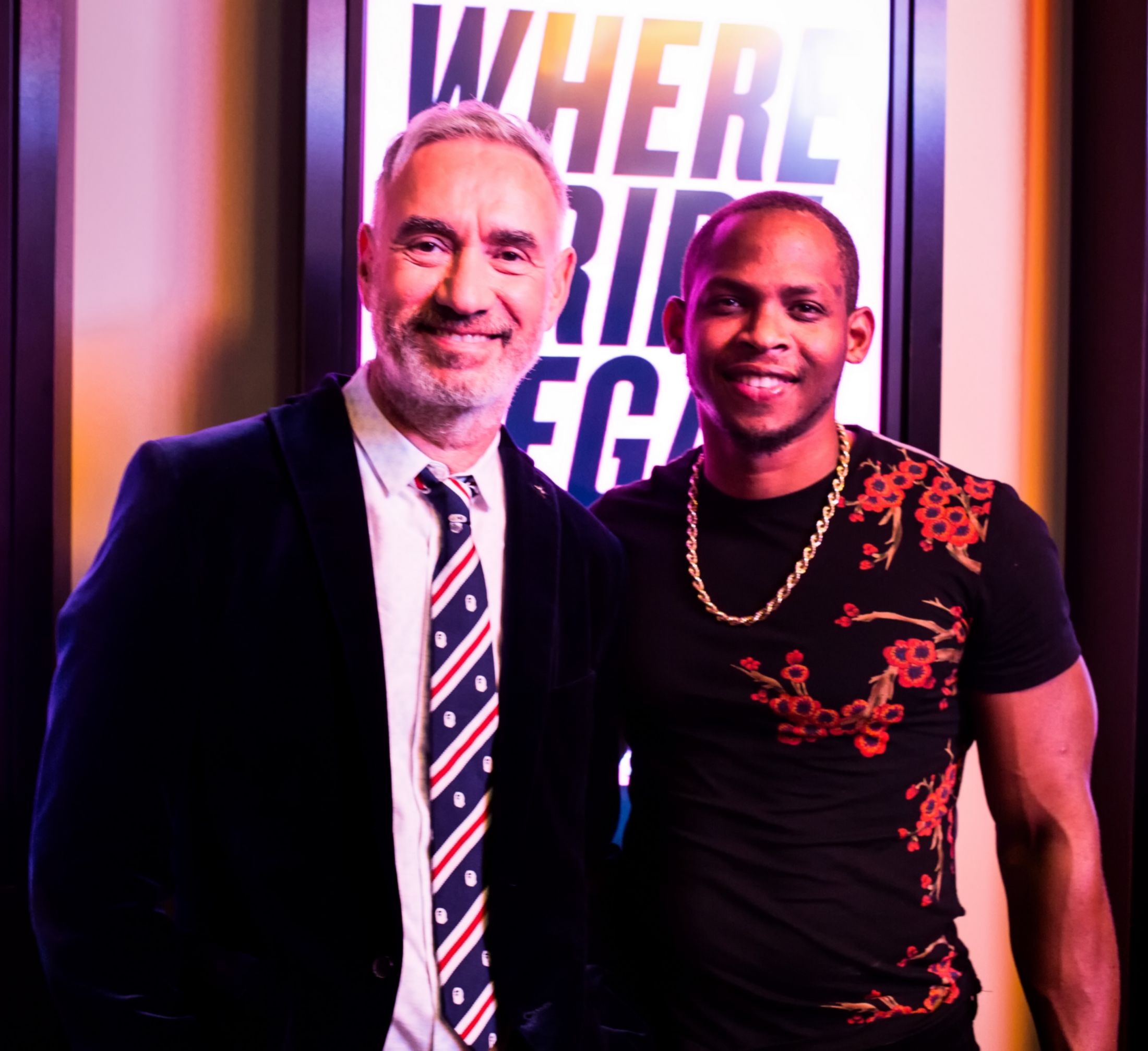 
Premiere of "STONEWALL!" was on Wednesday, September 23rd, 2015 @ 7 p.m. (PST) appropriately in Hollywood at the beautiful Silver Star Theatre at the architectually-fabulous Pacific Design Center in West Hollywood, California.  Director Roland Emmerich was as smilingly proud and kooly-dressed as ever!  The National STONEWALL Rebellion Veterans Association ("S.V.A.") was represented in California coast-to-coast by Stonewall vet Willson L. Henderson, director of the S.V.A. and 'Stonewall' consultant on the film, from New York City, Martin "Marty" Boyce, another Stonewall vet and the 'drag' consultant, from Manhattan, NY, and Stonewall vet Peter S. Fiske, member of the S.V.A. Executive Committee, from Palm Springs, CA.  Also on the entire scene, and looking very Hollywood, was the SVA's non-vet, twenty-something, hot office manager AnDre M. Christie (pictured above with Roland).  After the great premiere screening to thunderous applause for the movie and a prolonged standing ovation for the deserving Mr. Emmerich, there was an exciting and huge "STONEWALL After-Party" at The Abbey, a super Gay nightclub in West Hollywood, California.

Willson L. Henderson on the Red Carpet at the "STONEWALL!" Movie Premiere:
ImageCollect.com/pictures/Willson-Henderson-photo-7280140/STONEWALL-Los-Angeles-premiere *

Director Roland Emmerich cites Stonewall vets Willson Henderson and Marty Boyce:
www.Salon.com/2015/09/24/Stonewall_proves_White_guys_can't_compete_on_merit_for_every_film
The writer of this article starts off okay but it doesn't last long.  He or she, we can't tell from the name Irman Siddiquee, soon states the names of two people who were not leaders at the Stonewall anything; one who was a chronic stoned alcoholic thief and daily drug abuser who was not there and the other had severe memory problems even then, yet fails to mention any subsequent actual "leaders".  The writer does not even know that this event was happenstance not arranged by "leaders"!
Note:  Many of these 'reporters' are not American and, in fact, are reared
in third world countries that are grossly anti-Gay and breed homophobia!
Thus, unlikely they are fair reviewers.  Most were not even alive in 1969!

E-mail your comments, questions and/or suggestions to the
STONEWALL Rebellion Veterans Association
at:  SVA@STONEWALLvets.org

The forthcoming "SVA's 52nd Annual National STONEWALL Rebellion Veterans Association Conference & Stonewall Veterans Reunion + Testimonials" shall be on Saturday, June 26th, 2021.  It features actual 'veterans' of the New York City police raids from 1966 to 1969 at the original STONEWALL Club and from June 27th to July 3rd, 1969 in any of the five inconsecutive nights of the historic Stonewall Rebellion in Manhattan, New York City ("NYC").  The uprising is effectively and accurately  enshrined forevermore in Roland Emmerich's dramatically-portrayed, fact-based and memorable movie "STONEWALL!"  The S.V.A. conference also presents New York federal, state and city public officials, including U.S. congressmembers, NYS senators and assemblymembers and NYC councilmembers, and heads of G.L.B.T. organizations as guest speakers!  Maybe some of the surprise guests -- the S.V.A. always has them -- may be some of the ace actors co-starring in the "STONEWALL!" movie!  Original 1969 "Songs of The STONEWALL Club Jukebox" are played, as always, at the opening, the intermission and the closing of the three-hour event.  The great songs feature Diana Ross & The Supremes, Frankie Valli & The Four Seasons, Barbra Streisand, Frank Sinatra, Mary Weiss & The Shangri-Las, Michael Jackson & The Jackson 5, Shirley Bassey, Marvin Gaye, The Angels, The Spiral Starecase, Martha Reeves, Stevie Wonder, The Honey Cone, The Beatles, Cilla Black, Chris Montez and many others!  The 52nd annual S.V.A. conference and Stonewall reunion happens again at the historic St. John's Evangelical Lutheran Church at 81 Christopher Street off Seventh Avenue South in Gay Greenwich Village, Manhattan, New York City, on Saturday, the 26th of June in 2021!

For much more 411 and details on the significant S.V.A. event, visit:
https://www.StonewallVets.org/upcomingevents.htm

Premiere of "STONEWALL!" was on September 23rd, 2015
at the Pacific Design Center in the Silver Screen Theatre
in West Hollywood, Los Angeles, California, U.S.A.

Worldwide opening of the "STONEWALL!" movie
by director Roland Emmerich was on September 25th, 2015.

Roland's recent movie is about the monumental naval battle at "Midway!"
in the Pacific Ocean during World War II in 1942.
It was released appropriately before U.S. Veterans' Day in 2019.


S.V.A. color theme in February is red for Valentine's Day and Heart Month!